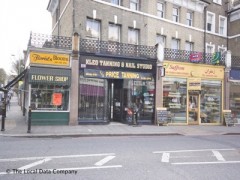 Tweet
About: Kleo Tanning & Nail Studio specialise in an assortment of nail treatments including manicures and pedicures. They also have 2 sunbeds.

I was given gift voucher for facial.
Facial was very pleasant and relaxing.
Staff was very friendly.
I would like to recommend this beauty place.

Anon, Putney
Added: Mar 2014
Had appointment for threading. from beginning the therapist was rushed and I felt unwelcome and uncomfortable. Threading job half done. Avoid this place.
Added on Sat 22 Mar 2014 at 14:50:44 [report] [respond]
User Rating: 10 / 10

By far the best wax I've had. They use different waxes for different areas of the body. Which is great as skin types are all different sensitivity etc. Best results I've had and with he least amount of pain and quickly! Highly recommend.
Added on Fri 06 Dec 2013 at 15:09:23 [report] [respond]
User Rating: 10 / 10

I would like to recommend kleo beauty shop.
Staff is professional and friendly

Made an waxing appointment for 1130 on a Saturday morning.
Walked in, place looked very dark and a little grubby but I was willing to give it a go.
At 1135 noone has said anything so I asked what was happening - was told that the therapist was running late and would be another 5-10 mins.
At 1145 I asked again what was going on and was told it would be another 5-10 minutes.
So a delay of almost 30 minutes minimum.
Not acceptable and won't be going back.
Especially annoying as parking around there costs £2.50 an hour - so a waste of both time and money.
AVOID.