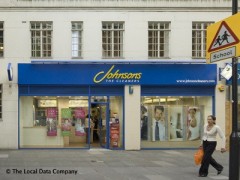 Johnsons offer a dry cleaning and laundry service. They also do repairs and alterations.

Reviewed by PG from Sloane Avenue
The service is not friendly, not professional, and regardless of how loyal of a client you are, they will still make no attempts to fix problems they have caused (low quality cleaning, unsatisfying repairs etc).

I would suggest hiring more cordial and professional staff, or perhaps re-training.

I hope this is helpful.

Reviewed by Ana from Chelsea
The most unfriendly service ever!
Tried to redeem a promotion and the arrogant guys were so rude that I took my clothes next door.
In fact, I had problems with the same manager before. How can he still be there after so many bad reviews?

Reviewed by lina from london
Shocking! I brought to dry clean my Louis Vuitton dress, they charge up to 25 GBP for the dress.This arrogant guy came out and said ,,I don't know how much it's gonna cost for u, we have to put a special pricing for it'' Really? I never heard of it! ,,Yea you know ferrari is not the same like Ford''. You bet it's not the same! So he came up out of his head with 100GBP charge! I said thank you very much and left, gave the dress for cleaners next door and paid 25 GBP for that.

Reviewed by fdfghdfhdfhdhcghc
I would rate &quot;-1&quot; if i could.
Almost all the staff have bad attitude and the service is appalling.
I took a coat with leather belt buckles there and the manager said that he thinks it will be fine, but if not he will replace the buckles - i responded that i really would like to get the coat back as soon as possible but would rather wait than have it damaged. He said it will be fine. Well, it is not fine. The buckles are damaged an he doesn't have any other buckles to replace them with - apparently it could take up to 2 more weeks - absolutely not acceptable... No to mention that when i first went to collect it the manager was not there and the staff that was had a very bad attitude and told me to come back the next day to speak to the manager - seemed like no one else was in charge or able to do anything at all.
The next day manager was again not there - i refused to come back yet again the next day to speak to him, so they agreed to call him. Overall just additional stress over something so simple that i really don't need. Will never be using them again!!! I don't recommend for ayone else either.

Reviewed by anonymous from South Kensington
I would rate them with zero stars if that were an option. Abysmal service. I took in a skirt to have a zipper repaired - when I went to pick it up the zipper hadn't been sewn in properly, when I went to pick it up the second time the hook and eye had been placed with the hook on the outside and the 'eye' on the inside and the new zipper was far too wide and needed to be replaced with a slimmer style. When I went back the third time the hook and 'eye' had been placed on the outside - ludicrous. And the zipper had not been replaced. An oversight, and the manager actually told me that the tailor had told him the hook and 'eye' was supposed to go on the outside and not be concealed. When I pointed out that this was contrary to my instruction and simple design aesthetic the manager told me he did not remember that part of our conversation. But simple common sense? I will not let them try to make amends by giving them a fourth attempt. Far more businesses are deserving of my support.

Reviewed by Anonymous
I haven't even used them, but just called for a quoteto get a silk dress cleaned. She asked my how much the dress cost (approx. £80) at which point I was told it would cost £17-25! Talk about daylight robbery! Will go back to my ususal cleaners on Globe Road, Bethnal Green. They charge £5.50 and have it done within 2 days!