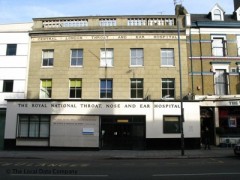 The Royal National Throat Nose and Ear Hospital and Eastman Dental Hospital are training schools for post graduate medical students. This is their new site, with all the latest facilities.

Reviewed by Jenny Seevers from Portsmouth
I am delighted to be able to say all the Staff (except for one Pharmacist) I have encountered in the Allergy Outpatient Department, have gone out of their way to be helpful and kind to me, every time I have visited. They are always so very busy, but always listen and do their best to help. I can honestly say they have given me back my life - now I can breathe easily and smell again, having suffered for nearly 20 years with no relief. They diagnosed and solved my sinus problem, and now I look forward to everyday with joy and anticipation, rather than pain and dread. Thank you.

Reviewed by dannyamosflynn
At the age of 46 I had my first ever operation here so I was a little bit nervous. (The only pain I've ever felt in my life was when my mother addressed me by the dogs name, Laddie she called me!) I had to have my septum straightening, which was in an 'S' shape (which I did't think was a problem myself as I am a typographer but I was told by my doctor after sleep monitoring that this affected the airflow and therefore restricted the oxigen that my brain was receiving). A nasal septoplasty it was called. The hospital beds and walls looked like something out of the 1950's but it looked very clean. Every member of staff from the reception and the nurse who looked after me while I was admitted to the anesthesiologists and operating doctor were professional and friendly and I cannot thank them enough. I am a very squeamish person who is even afraid of cotton wool but I was made to feel very comfortable. I believe I was in good hands and would suggest that others admitted there in the future will be too.

Reviewed by Anonymous
I have read the positive reviews about this hospital and don't dispute them. If I could feed back though on my recent experience there in the Outpatients' Dept, having been referred there by my GP with sinus problems. There were some pleasant people there, but the overall impression in this department was that staff were apathetic and unhelpful. I am referring in particular to the desk I was sent to in the CT scan department, where I was received by a totally unhelpful, unsmiling man, who clearly didn't care about my predicament. I was very nervous about having the scan and he certainly didn't make me feel any easier about it. When I emerged from the experience, it was 5pm (closing time). I was referred to the front desk with my details form which I was meant to hand in. The guy on the desk just pointed in a vague direction, saying &quot;put it in the box&quot;. I had to look for the box (on another counter) and then take the box back to him to check it was the right thing, to which he grunted an affirmative response, with no eye contact whatsoever. It was all overwhelmingly impersonal. I know staff in the NHS are overworked, but surely pleasantness of character should be an integral part of the prerequisite for securing a job in such a department?:(..Christina

Reviewed by Anonymous
I had a septoplasty and rhinoplasty operation at this hospital. The after care on the ward was dispicable. I had to ask for help at every opportunity. One head nurse was particulrirly rude and caused much misery for me. Prior to operation information was scarce and when I would ask for further advise I was treated with contempt. After 2 weeks I had the plaster on my nose removed. I saw the worry on my consultants face as he noticed a problem, which I had noticed too, but this was brushed off. 6 months on and I am disappointed with the results, they didnt listen to me, they shortened my nose when I had been specific that I did not want any length removed &quot;under any circumstances&quot;...the sugeons shortened my nose none the less.
When you call reception the staff are rude and not always accommodating especially if you ring in the morning. I wish I could praise the hospital, I would really like to but the service was awful, the only consolation I have is that my personal consultant was very understanding and supportive to my initial needs.

Reviewed by Anonymous
I have nothing but praise for this hospital it stepped in and helped when other hospitals were unable to deal with my condition. They did a first rate rate job and I cannot thank the staff enough for all their help and understanding of my situation. Nothing was ever too much trouble and they treated me wonderfully and I have been back since and continued to have first class treatment.

If you are sent to this hospital you know you will be in safe hands. Prof Lund is brilliant and is recognized throughout the world for her work and I can verify this after speking to other E&amp;T consultants in other countrys who knew of her work and informed me I had been treated by the best.

be rest assured you have been sent to the best hospital and you will be treated wonderfully. Knock spots off your local hospitals well ours anyway.

Reviewed by Anonymous
I have been to this hospital many times and always found it friendly. efficient, clean and professional.