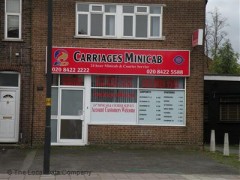 Reviewed by Gagan from Harrow
I will never use them again. They are rude, unprofessional and arrogant. I booked a pick up at Terminal 3, gave them flight number and terminal. When I switched on the phone I had an sms with tracking link which showed the car is still at Harrow so when i reached the luggage belt at 07:00 pm I called them to ask where taxi is and he said it is already there at the airport. There was a delay in luggage and i got it at 07:30 pm. When I called the driver he said he has come to pick me up at Terminal 2 and not 3 so he took another 15 mins to arrive.

Then on the way the driver got a call from their office to charge £5.00 extra. When I called them and challenged they were extremely rude.

I had used them a number of times in the past and also recommended them to few but now they have lost their loyal customer. Will never use them again

Reviewed by Andrew from Harrow-on-the-Hill
I have used Carriages on a regular basis every week for the last three months. I have found them reliable, punctual and polite. I may be wrong, but I think they're one of Harrow's oldest cab companies. I would definitely recommend them.

Reviewed by linda from Northolt
Do NOT USE THIS COMPANY ! give them a wide berth, as when they do their drop off they feel they have the right to urinate on/around your property,it is a continous problem,and they do not CARE.

Reviewed by Manisha from LHR
They are very rude!! I ordered a cab at terminal 2 LHR, they told me half hour wait and to go to departures.
I was waiting with two kids and luggage!
I called them after 45 mins and they said driver is almost there!
After one hour the driver called and said to go back to arrivals and I'd have to pay extra for the parking!
I called the company and they were extremely rude about the whole situation and just hung up on me.

Reviewed by Mary78
I am appalled at the service I received from this company, not only did it go to the wrong address in the beginning, I asked for him to drop someone of on the way, which he did at a red light, he then tried to charge me £5 extra for this which I obviously did not pay, he classed it as 2 drops, please tell me where the second stop was when they got out at lights also when I phoned up he said that is not the way, I said every other cab go's that way, he said it is the quickest way but not the shortest, do's not make sense, will never use them again, con artist and I am not stopping here