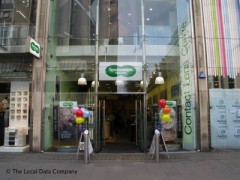 Specsavers Opticians is a chain of opticians that supply a range of contact lenses and spectacles. They also offer eye tests.

Reviewed by annie jones from northwood hills
I had an eye test booked for 5pm and had the most friendliest and professional employers,from the eye test to deciding on my new specs!
To the manager,you have amazing staff,very friendly and professional,I spent my whole time nattering and laughing which is great customer service
I hope you feed this back to them,my apt was 5pm .

Many thanks for a fab service

Reviewed by Karen Newman from Bromley
I recenty changed to my local branch and they couldn't be bothered to respond to requests for my info. When i called and asked why i was told by the first lady (with the telephone manner of a child) that the fax machine was broken, then put through to another who said she would fax it?

Reviewed by robstockwell
The reviews on this store seem to be located in the extremes - either brilliant or don't go there.

I have just purchased a pair of glasses there and found the whole experience polite, efficient and stress-free. Arranging the eye-test was easy, the optometrist was charming, helpful (even suggesting that I could stick with my off the shelf readers), and had a sense of humour.

Buying the glasses (I still needed the ones for longer distances) was equally without pressure. I eventually went for the cheap and cheerful end of the range but there was no let up in the quality of service. A slight downside was that they didn't have examples of all the frames I'd shortlisted from the website but it wasn't a huge problem. I arranged to pick the glasses up in a few days but rang after two to ask whether they'd arrived and whether I could pick them up sooner. The appointment was altered without issue and the person I collected them was very helpful.

So, all in all a good experience and I cannot understand the previous (extremely) negative comments. Perhaps there's been changes, but my experience was that I didn't have a problem and if anyone were to ask me whether it would be worth going there, I'd say 'Yes'.

Reviewed by Newbie20
I went for eye test recently and as I have complicated eyes i wanted to see someone experienced but no one available on that day, the optician who i saw could not answer my questions, and he ordered my contact lenses for which I never got a call back. I called few times about the lenses, finally they arrived and was seen by the same optician again but I couldn't see with the lenses and he said he needs to order again. I went to a different optician and found out that they were giving me the wrong prescription. I called back to complain not only to find out that the optician i saw is director and that he would call me to explain, but not had a call yet. AVOID not going back again!!

Reviewed by marmite_84
My main reason for going here was the large selection of frames. The price I ended up paying was a little more than I hoped by I love my new glasses. I had to wait 10mins for my test but they had my glasses ready the same day.

Reviewed by Londonerr
The Worst Eye test ever as the optician was rude and did not care about my concerns at all. It has a worst customer servive, I called the branch to complain to the director of the branch, I was put on hold for 5 minute only to be told that he will contact me later and he is not in. I have never got a call back from the director it is the worst branch of Specsavers. Avoid Avoid at all cost. AVOID AVOID AVOID.

Reviewed by not convinced from london
i think its fairly obvious to anyone reading these reviews that the 2 'positive' ones with 10 stars were clearly written by the staff themselves at this appauling practice. avoid at all costs. worst specsavers ever.

Reviewed by Anonymous
I have been trying to book an appointment for a while. I finaly managed to get through to someone who said that they would call me back....I am still waiting.....

Reviewed by Anonymous
I am so suprised to hear the bad reviews as I have never recieved such good service. I broke my glasses and they were able to offer me a sight test and glasses all in the same day. A big thankyou to Moubine and Sheetal who made the process so easy and professional. I would highly reccomend this store and the choice of frames is far greater than most Specsavers Ive been in! Well done Specsavers Tottenham court Road!

Reviewed by Anonymous
I'm very surprised to see so many negative comments. I was in there a week ago to get new glasses. None of my friends could come and help me pick out my new specs, so the staff offered to help me. Several employees walked up and gave me advice on what sort of phrames, what colors and shape suited me.

These guuys were great, and their customer service was excellent. Not once were they rude with me.

Also did my eye test with Specsavers (although, branch in Victoria) and it was all accurate.

So yeah, my experience was very good, and I'll def come back to the same branch if I need to. They also have the biggest Specsavers selection of glasses in London.

Reviewed by Anonymous
I went there and they were very helpful. They produced my new glasses in an hour- and they are atypical

Reviewed by Anonymous
I have not used it yet and I was trying to book an appointment with them until I read the reviews that were left by other customers. That is horrible, they have to do something about it to change the situation around. I live nearby and I am scared of using it now.

Reviewed by Anonymous
Avoid at all costs! I've been with specsavers for 10 years in Nottingham with no probs. This branch is terrible. Had a sight test for new glasses. Purchased new glasses costing £350. After 2 weeks of wearing the new glasses and experiencing headaches,I went back for advice. They told me they needed adjusting as the angle was out. Went back two weeks later still getting the headaches. Advised that it would be best to book into Moorfields Eye Hospital for a total check. Did this, no problems with my eyes but still getting headaches when wearing glasses. Went back again to be told I needed a sight test as they had nothing on thier records despite the new glasses being made to the prescription from the test 5 weeks previous! I returned a week later with my copy of the prescription. On looking into it, they realised that the glasses were made up with the lenses in the wrong eyes (a differnces of -2.5)!!!! They offered to change them for free but I'm still getting problems and they still don't have my details on thier system. There is no way anyone should trust these people with thier eyes. I've cancelled all my business with them and will not be going back and suggest you do the same.

Reviewed by Anonymous
i must agree with the other reviews- most staff i encountered were outright rude and pushy, and i waited an hour for a contact lens fitting that i had booked- not a walk in! as a new customer to them i wasn't impressed at all, and will be taking my business elsewhere.

Reviewed by Anonymous
Avoid!I experienced one of the worst customer services and I decided to register with another optician in the end. Avoid, Avoid, Avoid!!

Reviewed by Anonymous
I agree with previous reviews. When I have had eye tests / contact lense checks the opticians themselves are thorough and efficient. However the counter staff dont understand their own systems, seem to have 3 records on me which have addresses from years ago, and take forever to be sorted out.
Avoid if possible!

Reviewed by Anonymous
Do not register with this branch. Their customer services is non-existent. They have neglected to update my files several times, have left rude messages on my mobile and generally shambolic management. Avoid.

Reviewed by Anonymous
The Tottenham Court Road branch is an absolutely nightmare. Avoid registering there at all costs. Appalling customer service, far too busy and not enough staff. The Opticians themselves are very good but staff on the front line are a nightmare - rude and patronising and take ages to sort anything out. They cocked up my order on several occasions and have never really properly apologised. Took quite a lot of chasing to get them to sort out their mess. AVOID AVOID AVOID