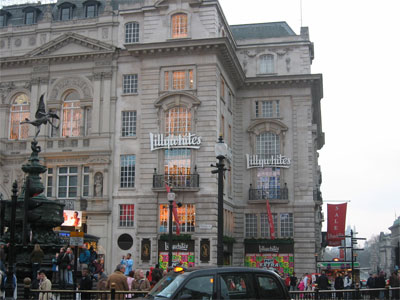 Founded in 1863, Lillywhites is one of the oldest and most famous shops in London. Specialising in sporting goods, the shop has always prided itself on being able to obtain items related to even the most minority sports. Housed in a beautiful early Victorian building on the edge of Piccadilly Circus the shop has attracted the greatest sportsmen, celebrities and royalties for well over a century.

Unrivalled in its service and quality, the shop is just as much as an attraction as a working example of an old English department store as it is a place to buy sporting goods.

Reviewed by Gemma from Ealing
I visited Lillywhites today, the first time in 15 years. I was shocked at how downmarket this once iconic shop has become. It resembles the ubiquitous tacky high street sports shops. It's something akin to Fortnum's being taken over by Lidl!

Reviewed by Angeles from Barcelona
I'm from Barcelona. Last November I visited London for the first time. My daughter asked me to bring her an Olympic Games t-shirt and someone adviced me to look for it at Lillywhites. Woooww!! It's the biggest sports shop I've ever seen! I l spent the whole afternoon there and I bought presents for all my family. And I found very nice shop assistants...I forgot my wallet at the till and they watched over it and returned to me when I went back.
If you like sports and you visit London, go there!

Reviewed by Eduardo from London
Absolutely poor service a negligent actitude among the staff towards the customers , I went to buy a premier league shirt was not given the free budget that was advertise , manager made together with the staff a racist comment about Spanish people on the second floor ! They just a lost a customer

Reviewed by Mr Singh jassal from twickenham
Tried to call was number 4 while the phone rang went down to number 1 and the phone was answered only for the person to to put the phone down .I called back 3 times and this happend every time I called .Do you call this customer service well I THINK RUBBISH.There are over 2.5 million people who need a job get rid of the dead wood and get people in who want to work and give the company a good name.

Reviewed by MJG from Australia
I found Lillywhites to be great value for money. We were overseas visitors to London and went back three times during our last visit and purchased branded items at half the price we would pay locally. I am looking forward to going back again sometime in the future.

Reviewed by Joanna Murphy from London
I bought shoes that, when worn at home, killed my feet and could not return them as the salesgirl had not, contrary to my instructions, put the sales slip in the box or bag. The shoes cost £80 so they weren't cheap. I tried calling the only telephone number on the website (no e mail) and held on, paying for the 0870 call, for 25 minutes being told I was number 2, then 1 in the queue. Finally when I was told I was no. 1 and it started ringing, I was disconnected.