The publication of the latest restaurant guidebooks has meant a fair bit of movement on the All In One Ultimate Restaurant List, with Sketch, Medlar, Tom Aikens and Dabbous the biggest winners so far... 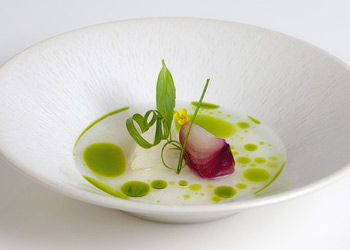 The 2013 Michelin star winners were leaked at the end of September, with Dabbous, Medlar, Alyn Williams at the Westbury, Hedone, Trishna, Launceston Place, Tom Aikens and St. John Hotel awarded their first star, while Sketch won its second.

The Harden’s Guide rated Dinner by Heston as their top restaurant, with the Ledbury, Dabbous and Pollen Street Social all faring well. On the other hand Alain Ducasse and Gordon Ramsay yielded disappointing results. Despite their survey naming Dabbous as "London's best newcomer in years” a debate ensued on Twitter over whether the restaurant had been over-hyped in the run-up to its launch, as the Harden brothers didn’t believe the food to be up to scratch on their visit nine months after its opening. Had Fay Maschler’s 5 star review in the Evening Standard been somehow swayed by a wiley PR campaign, they seemed to hint at in an initial, now amended post on their website? This resulted in a feud with journalists who naturally argued that Maschler and her colleagues are under no circumstances likely to be taken in by clever marketing. See what we thought of Dabbous here.

Zagat’s overall scores have risen, and we wonder whether this bears some relation to their recent takeover by Google. Their ratings use readers’ opinions, so could this be due to a greater amount of people surveyed? The Wolseley won most popular restaurant for the second year running, and best newcomer went to Pitt Cue Co. More surprisingly only one in ten voters named British food as their favourite cuisine.

So how have these results impacted the All in One Ultimate Restaurant List? Dabbous is the highest new entry straight in at number 15, followed by Tom Aikens at 20 – check out our review of the latter here. Medlar has jumped 11 places to number 12, and Launceston Place has jumped from position 81 to 66 thanks to its new Michelin star. You can read our recent review of this veteran restaurant here.

At the moment the top 10 shows little movement with The Ledbury and Marcus Wareing at the Berkeley still at numbers 1 and 2 respectively. Last year’s most spectacular entry was Dinner by Heston at number 3, still standing its ground at number 5. On the other hand Hedone, last year’s number 10, has dropped to 37 despite its new Michelin award. In its place is Sketch, who climb 17 places.

But there are more awards and ratings to come, among them San Pellegrino’s World’s 50 Best Restaurants and Square Meals’ Restaurant Awards. Keep your eyes peeled in the coming weeks on how these will affect the All in One Ultimate Restaurant List, to be published in the summer.

Which restaurants on the Ultimate Restaurant List are you dying to visit? Follow us at @allinlondoncouk and tweet us which ones are on your wishlist for a chance to win a pair of tickets to Taste of Christmas, taking place December 7th - 9th. Competition closes Friday at 5pm.