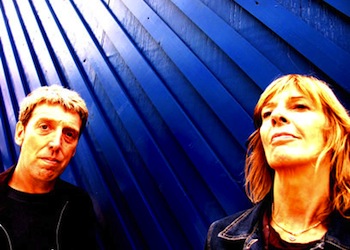 System 7’s Steve Hillage writes our guest blog this week. He delves into his musical past taking in clubbing, Jimmy Hendrix and The Orb. Oh, and he gives us a top ten dance tracks to get down to this weekend!

We’re playing on The Orb’s 25th anniversary show at the London Forum on Saturday 19th, which brings back memories. We’ve had so many great experiences with Alex Paterson and The Orb, both in the studio and on gigs.

A lot has been said about when we first walked into the Chill out Room at Heaven, on one of the very first Orb nights in autumn 1989 and we heard Alex playing our ‘Rainbow Dome Musick’, mixed with beats. But it really was the moment we knew that System 7 had been born. We had in fact met Alex a couple of times before that particular night, in fact he invited us to come down, and that same night I remember Alex played a very early version of ‘Little Fluffy Clouds’ which sounded fantastic!

Miquette and I wrote ‘Blue Room’ with Alex and Thrash in our Notting Hill flat in late August 1991 while the Notting Hill Carnival was going on all around us, which was an interesting multi-dimensional sound experience! Now I’m looking forward to guesting on Blue Room at the anniversary shows.

I’m a Londoner – born and bred in London – and I still live here, so I guess you could say I’m pretty fond of the place. My school was in the city, and with my friends who were all budding musicians like me, we were in the habit of going to the Marquee Club after school to see live bands. A very special experience for me, that has marked my whole life, was seeing Jimi Hendrix at the Marquee from 6 feet away. I saw him twice – amazing! Where else apart from London could I have had that experience?

I’ve had a flat in Notting Hill for more than 40 years and although I was born and grew up in East London, I eventually gravitated to the west. Notting Hill has changed a lot, and in some ways I don’t like it, but because I know the area very well I’m still aware of the elements that remain from how it was in the 70s. Holland Park is great as well – a wooded island of tranquillity in the big city!

What’s really great about London is the creativity and sheer vitality that comes from its massively cosmopolitan nature. Yes it’s a bit of a maze and the architecture can be a bit of a mess, but I like the way it looks, I like a lot of the new buildings like The Shard, and I love the fact that there are lots of trees and open spaces. Compared to most other cities I’ve spent time in I feel more freedom and more tolerance in London, and I think that’s one of the reasons that it remains such a great place to live and make music in. For music it’s a hub.

1. Sunburst (The Flutter Mix) - The first System 7 release and the first track we made with Alex Paterson, with whom we are playing the two Orb and System 7 shows this month.

2. AlphaWave (Plastikman Acid House Mix) - The massive remix made by Richie Hawtin that still rocks the crowds. Probably our biggest ever dance floor track. The full mix is 19 minutes long!

3. Hinotori (System 7 Version) - Our biggest track in Japan and the lead track of our album Phoenix. Soon to be re-released on our new Phoenix Beats digital LP, with other dance-orientated tracks from our Phoenix Rising collaboration with Japanese band Rovo. Both this track and the recent Rovo version have amazing Japanese animation videos!

4. Space Bird (Dubfire Deep Space Remix) - A great collaboration between System 7 and Jam El Mar (of Jam and Spoon) with a top remix by Dubfire that was No.1 on Beatport’s main chart for two weeks. Also to be re-released on Phoenix Beats.

5. PositiveNoise - Another great collaboration – this one’s with A Guy Called Gerald and produced in Berlin. There are a number of different mixes of this track, all of them good with a fantastic one by Carl Craig.

7. Habibi - Another important track from the very first System 7 album, blending lush ambient house with an emotive Arabic vocal sample. An element of this track has been reworked on the new track Love for the Phoenix on the new Phoenix Rising album with Rovo.

8. Coltrane - A track from our Fire album that honours the great jazz musician John Coltrane and packs a heavy techno punch with a bit of influence from Jeff Mills.

9. Big Sky City - One of a number of very special collaboration tracks we have made with Derrick May. The original version is on our album Power of Seven and it reappeared with two different mixes on our Mysterious Traveller collection.

10. Song for the Phoenix - A bit of a chill out classic, we can play this track in both System 7 and Mirror System sets. Elements of this track first appeared on the track Y2K on our album Golden Section, but the main version is on the Phoenix album.

System 7 are Special Guests on The Orb’s 25th Anniversary Show at the London Forum on Saturday 19th October.