He's best known for entertaining some of showbiz's biggest names, as well as being top chums with Prince William, but we've managed to catch up with him long enough to find out more about his favourite bits of London. 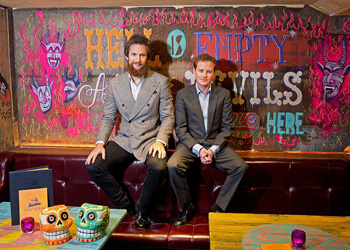 You might bump into Beyonce and Jay-Z, Rihanna, Lindsay Lohan and Kate Moss at Guy Pelly’s Mayfair nightclubs Mahiki and Whisky Mist. His latest venue is Mexican-themed Tonteria in Chelsea, patronised by a similarly high society clientele. On Thursdays the club runs the infamous Do Not Disturb night, where models and waitresses parade around in lingerie and bondage gear - the promo video was so racy it was initially banned by YouTube. He’s also very pally with the royals and was entrusted with organising Prince Williams’ stag do. We caught up with Pelly to ask him what he gets up to when he’s not entertaining celebs and aristos.

For shopping I’m slightly hooked on Rag & Bone at the moment. It’s next door to Tonteria on Sloane Square as well which is dangerous!

The most romantic place is the Albert Bridge. It’s a beautiful old bridge and has amazing views up the river Thames. It’s also lit very prettily at night.

The best place to take someone on a date is Tendido Cero on Old Brompton Road.

When I’m away the thing I miss the most is an English pub and a pint of bitter.

I take the tube but I prefer the bus.

The furthest I’ve been from home (in London) is Wapping, to visit The Wapping Project.

I want to open more venues. I’m looking to go back up to Mayfair where I started my career. I’m thinking about hotels or a private members’ club concept.

If there was one thing I wish London would sort out once and for all, it’s the councils shutting great pubs and great venues because they supposedly disturb residences.