It’s our final update before we unveil the only restaurant guide you’ll need all year: the All In One Ultimate Restaurant List. 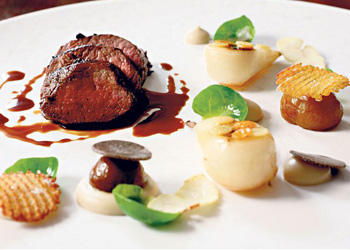 It’s been a vintage year for London’s restaurant scene, and we’ve seen lots of new entries on the list in the last few months. The biggest sensation so far is Restaurant Story, straight in at no. 20. Tom Seller’s first restaurant has wowed diners with its imaginative cooking and literary theme, and was awarded a Michelin star just six months after opening.

Jason Atherton has followed up the success of Pollen Street Social with the more casual Social Eating House, landing on the list at no. 23. The smoked duck ham, egg and chips has become a much talked about signature.

Other new entries are seafood expert Nathan Outlaw’s eponymous Outlaw’s at the Capital, in at no. 30, Bruno Loubet’s veggie-centric Grain Store at no. 53, and Mark Hix’s steak and chicken eatery Hix at the Tramshed, entering the list at no. 62.

Bubbledogs makes an appearance for the first time too at no. 64, but it’s not their hotdogs and champagne concept that’s made the list, rather it’s Kitchen Table, the 19-cover eatery round the back that offers a tasting menu made with the best produce of the day.

To make room for the new arrivals there have naturally been some losses. Both The Delaunay and The Wolseley have dropped off the list from positions 61 and 75 respectively. Pizarro, previously at no. 58, and Quo Vadis at no. 42 have also gone.

The top 20 remains pretty much unchanged with the exception of The Ritz Restaurant which has plummeted from no. 20 to 42. Tom Aikens is up six places to no. 13, however its closure at the end of January may well mean there’s a gap for a surprise new entry.

The triumvirate of The Ledbury, Marcus (formerly Marcus Wareing at the Berkeley) and The Square are still holding on to their top 3 places, but for how long?