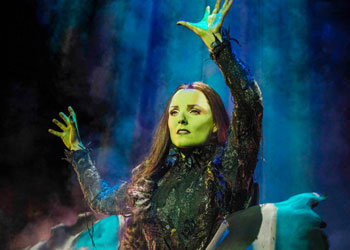 At just 35 years old, West End star Kerry Ellis has starred in some phenomenal theatre productions; from Les Miserables and My Fair Lady to We Will Rock You, Wicked and Oliver!

In 2006, Kerry played a two-and-a-half year run of the coveted lead role of Elphaba – the Wicked Witch of the West - in Wicked and in August, she returned to the role for a twelve week run.

As she takes to the stage at the Apollo Victoria Theatre for the final time this week, we chat to Kerry about why she was drawn back to playing Elphaba, her favourite London hang-outs and the secrets to becoming a West End star.

How have you found returning to Wicked?
It’s been a whirlwind for me. Crazy but lovely. I’d have never thought I’d return to the show – I did it for two and a half years before and have always moved forward, but when they asked, the timing was perfect.

What do you love about playing the character Elphaba?
She’s really complex. She goes to school as a quiet, geeky young girl and comes out of it a strong woman. It’s an interesting journey. It’s been five years since I played her, but when I got back on stage, it all came flooding back to me.

Your partnering leading lady is Savannah Stevenson, who plays Glinda. Are you good friends?
We didn’t actually know each other before I started but Savannah’s fantastic. I know we’ll stay in touch after I finish. It’s an intense show and it’s so rare to be able to share something like this with another leading lady. I’m glad I’ve been able to do that.

What advice would you give anyone who wants to be on the stage?
Don’t give up. I know it sounds obvious but theatre is a tough business. Things get very competitive and it’s hard not to get disheartened. Basically get as much experience as you can, do whatever it takes - the pay off is worth it.

How did you train to be a stage star?
When I was 16, I went to the drama college for three years. Then I worked as a hotel singer, cruise-ship performer and did panto’. It took me a couple of years of doing this training before I got my first theatre role.

What was your first West End job?
It was in My Fair Lady as an understudy for the part of Eliza Doolittle. What an amazing first job! It was at The National on Drury Lane.

What’s the best thing about being on stage?
It’s amazing that people actually come to see me. I feel very fortunate.

What’s your favourite thing to do in London?
I love just walking around – whether it be Hyde Park or around Soho. I think we forget to look up in London. But when you do, you realise how great this city is. St. Paul’s Cathedral, Big Ben – we take all those landmarks for granted.

Where’s your go-to restaurant?
The Dean Street Townhouse has a lovely atmosphere. It’s not too big, always busy and has a real buzz to it. I also like wandering around Soho and looking for those tiny back-alley restaurants.