We find out what makes the Latino start of the West End love London so much.. 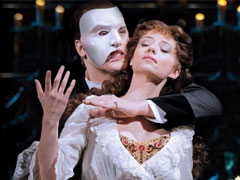 Gerónimo Rauch is the one and only latin American to portray the legendary characters of The Phantom in ¨The Phantom Of The Opera¨ and Jean Valjean in ¨Les Miserables¨ in the West End.

Gerónimo started his singing career at the Piannissimo Music Academy in Argentina with Maestro Cristián Bruno. He continued his training with Maestro Rodolfo Valss. In 2009 he met Suso Mariategui and Maestro Edelmiro Arnaltes and started training in classical singing and repertoire.

Concerts include: Placido Domingo’s 70th Anniversary Concert and he made his classical debut in December 2011 at the Spanish National Auditorium.

Here we have Gerónimo Rauch's very own Guide To London

My favourite theatre in London is...
I would have to say its Her Majesty's Theatre which is where I’ve worked mainly in my roles as The Phantom in ¨The Phantom Of The Opera¨ and Jean Valjean in ¨Les Miserables¨ and it’s pure joy to perform at this beautiful theatre.


My favourite music shop is…
I always go to Chappell in Wardour Street as they always have everything I need and I'm a very loyal customer.

My favourite clothes shop is…
I love Uniqlo for everyday casual wear and for special occasions I tend to go for Ted Baker. Both are fresh and stylish.

My favourite venue or club is…
The Phantom cast and I usually go to Century after work for a few drinks, which is a very theatrical night out - lol :-)

If I could perform with any celebrity (musical or non musical) it would be…..
I'd love to sing a duet with Adele! She’s amazing

My favourite pub or bar is…
The Blue Post as that's where all Les Mis people go for a drink. And they drink a lot! :-)

My favourite restaurant is…
I just discovered Morada Brindisa Asador in Picadilly which I love! It's pure Spanish food.

If I want a little peace and quiet when I’m in London I…
I'd go to a park! Any park as they’re a great escape in the city and there’s a great choice of parks too.

The best area of London is…
The South Bank for a buzzy and vibrant atmosphere with lots going on and Hampstead Heath in the North for a bit of nature.

If I could change one thing about London…
The weather- you know why!

My favourite memory or most special day in London was when….
When my son was born two and a half years ago.

One thing everyone should do in London is…and why
Go to the theatre or concerts! London’s great diversity in everything means you can find whatever you are looking for to keep yourself entertained!