We chat to Syban and Ruby Bird

Here Syban and Ruby discuss their unique styles and influences, ahead of their performance at Egg Ldn on 2nd April. 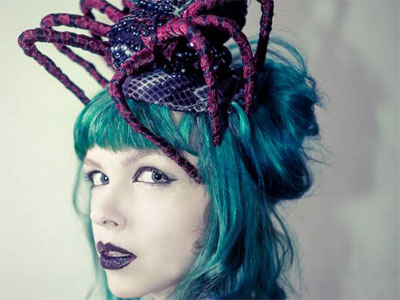 Performer and Costumier Ruby promises a ‘surreal alternate reality; where woman becomes creature in a narrative played out on the body as a stage’.
Her fire skills including body burning, eating, fire fans,and fire theatre using props such as a fire Halo aid her theatrical style and she has been wowing audiences at the Glastonbury Festival, Torture Garden, Rumpus London, Secret Garden party and Bestival. Expect fireworks at Berlin Berlin!

Here Syban and Ruby discuss their unique styles and influences.

Where are you from and are you based in London?


I grew up moving all over the world and recently I lived and worked in Japan for three years then for a while in Dubai and Amsterdam. Currently my studio (I am a fashion and costume designer, as well as performance artist) is based in London, however I travel, live and work all over the world.

Have you visited Berlin and what’s your favourite memory or experience? Have you also performed there?
I have visited Berlin, and will actually be there performing the night before the Berlin Berlin party at Egg Ldn. Berlin has an amazing dark chaos energy, that is not quite the same as the one in London but it’s definitely related. It is also the place of some of my all time favourite memories and magical experiences, but I don’t think those are safe to share ;)

Could you please recount your favourite club experience and why?
I have been performing in fetish and every kind of club/event/festival since I was 15 on a global scale and I thought I had seen it all and done it all everywhere, but Berghain in Berlin on a Sunday is something else which everyone should experience and is definitely my all time favorite club experience. I cannot quite put my finger on what makes it so unique and intense, but it is something everyone should experience.

How will you incorporate the Berlin style into your performance at the BB party at Egg Ldn?
Performance art as a mean of exorcism and transformation is a core essential part of the SYBAN performance experience, wrapped up in ballet shoes and exquisite costumes. At the moment I am spending some interesting times in Berlin so I will take the chaos energy I get from there and feed it into my performance for the Berlin Berlin party in London.

Do you identity with the Berlin Tanzbar scene of the 20s or do you prefer the performance scene of 2016?
A lot of the things I identify with are more personal and internal, than external scenes, however as I am currently spending a lot of time in Berlin I have more of a connection with what is happening there now.

Where do you get your ideas for your shows from?
My dreams, the moments when I wake up at 4am in some strange country in between sleep and wakefulness, the never ending hunger for exorcism, and the need to transform into my other selves through dance and letting blood in front of an audience.

Do you have any inspirations or performers, artists, etc that influenced when you first started and also who influence you now?
The springboard of my work is the costume aspect, and one of my biggest inspiration for this is Eiko Ishioka, a groundbreaking Japanese costume designer. Secondly a huge part of my performance art is ballet, Tchaikovsky’s ‘Swan Lake’ is the first piece of ballet I ever saw, and the story and the music inspire me to this day. Another instrumental part of my work is the medical aspect. I am very fascinated by pushing the limits of the human body in a beautiful way. When I was an underage London club kid one of the first shows I was a part of was with a medical dominatrix and that showed me the way of mixing needles blood and art. Shortly after I saw a show of the psycho cyborgs, and the fascination with body art was cemented. Vivid angel is like my freakshow mama and we are still good friends to this day. A huge influence has been David of Torture Garden who met me and gave me a huge platform when I first started and the team behind Torture Garden has always been a massive liberating inspiration. As to who influences me now, the list is incredibly long, but my nomadic lifestyle and all the different global artists I meet and connect with are a huge inspiration. There is an amazing performer that I do ritual worship with now that is currently quite a big inspiration in many ways, but again those details are possibly best kept to myself….

For people that have never seen your performance, what can they expect on the night?
A storm of ballet, ritualistic dark magic, avant garde costume, exorcisms, chaos, blood and despair.

Where are you from and are you based in London?
I am originally from South West London and my life long obsession with the city makes me a London denizen for the foreseeable!

Have you visited Berlin and what’s your favourite memory or experience?
I have! I visited Berlin a few years ago for the Film festival. My favorite memory was racing past buildings that blurred with alien graffiti in the back of a black car to a mystery location. The city was potent with some sort of forbidden excitement I felt I only glimpsed at the depth of through the windows. That little moment epitomizes the kind of fleeting but intoxicating love affair I got to first have with the city.

Have you also performed there?
I have not! But it is high on my list of cities to perform in extensively.

Could you please recount your favourite club experience and why?
My favourite club appearance would have to be recently at Rumpus with my fire partner Brex. We performed "Awen and the Angel of Death", a fire theatre duo that transforms a sacrificial virginal me into an angel of death by being hypnotised by Awens flaming violin. I end up stood in a crucifix as marta, my head adorned with a flaming halo. I loved performing this act, using my custom props and telling a real story with fire is really exciting. Rumpus party has to be one of my favourite events in London. It brings the alternative and magical atmosphere of a festival to a club, all in one place and all in one night. A carousel of beautiful chaos.

How will you incorporate the Berlin style into your performance at the BB party at Egg Ldn?
Through references to a wild and artistic underground in the scandalous climax of the act, and the traditional cabaret styling that mixes with the more contemporary and transformative nature of the costume. Expect undertones of rebellion, sex appeal and liberation bubbling under slick tailoring and darkened lips.

Do you identity with the Berlin Tanzbar scene of the 20s or do you prefer the performance scene of 2016?
My work identifies primarily with the contemporary performance scene but within my piece for Berlin Berlin, I seek to create something that sits in between the scenes styles. Expect a wildly luxurious, traditional cabaret aesthetic but that employs contemporary and alternative artistic entertainment.

Where do you get your ideas for your shows from?
Materials, music, life experiences and a wild imagination. An idea could come from a book, or a song I've heard, or just an innate need to communicate something outside of myself through performance.

Do you have any inspirations or performers, artists, etc that influenced when you first started and also who influence you now?
My inspirations come from far and wide but an obvious one would be Alexander Mcqueen. I would aspire to create as mind altering performances out of costume as he managed to do on the runway. Other than that I am inspired by artists such as Cindy Sherman and Leah Bowery for their performative and visual meditations on identity, and Tracey Emin for making me accept that autobiography can be an artform. Within my own scene in London I am constantly inspired by the Art performance of Cynth icorn, the genius of Marnie Scarlet and the sheer imagination and creativity and of Amy Statik.

For people that have never seen your performance, what can they expect on the night?
My work draws on the surreal, the sexy and the taboo with a mix of contemporary neo cabaret, costume and fine art. I am obsessed with the idea of a costume as an avatar for a performer. Drawing on a twisted imagination and alternate ideas of reality, my performance should shock, excite and entertain my crowd as a part of my own contorted fairy tale.