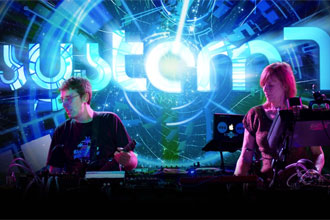 From Steve Hillage’s early presence in psychedelic originators, Gong behind the revered ambient opus "Rainbow Dome Musick", a cutting experimental edge has run through his and System 7’s impressive musical catalogue. From producing Simple Minds in the 80’s on ground-breaking albums 'Sons & Fascination' and 'Sister Feelings Call', which featured the classic instrumental ‘Themes For Great Cities’, System 7 pioneered the first wave of electronic dance dance and remain immersed in the scene both here and abroad with recent festival dates in Japan, Hungry and Italy.

Instrumental in launching the first official Dance Stage at the Glastonbury Festival back in the mid 90’s booking Carl Cox and Richie Hawtin for their Glastonbury debuts, System 7 released their first System 7 record in 1990 on Virgin Records and have now clocked up a further 16 albums including their latest ‘Cafe Seven’ set.

System 7 are arguably one of the UK’s foremost Live techno bands, uniquely featuring the electric guitar (with the sound often heavily processed) and are hailed for their impressive earth-moving Festival sets, and work with some of electronic music’s true innovators including The Orb (‘Little Fluffy Clouds’ and ‘Blue Room’ and Richie Hawtin who remixed their incredible ‘Alpha Wave’ classic.

They’ve collaborated with electronic music legends such as A Guy Called Gerald, Derrick May, Laurent Garnier and Jam El Mar, and have released a string of singles with classic remixes including Dubfire’s ‘Spacebird’ and Carl Craig’s ‘Positive Noise’.

System 7 play a one-off Live show for their ‘Cafe Seven’ album on Saturday October 13 th at Chelsea’s Under The Bridge venue, and are supporting The Orb’s 30th Anniversary UK tour this October having played the inaugural Orbfest at The Roundhouse in June.

If you could perform alongside any artist, who would you choose and where would your dream gig in London be?

I was asked who I would choose if I was asked to curate my own Meltdown festival at the Southbank. I said the first artists I would book would be ZZ Top, to play in the Festival Hall, on the condition that I could play with them.

What’s your favourite Live venue to play and what makes it so special?

I’m rather critical of most London venues, but I’m really looking forward to playing at Under The Bridge on October 13th. We went and checked it out and the sound was great and the video facilities were stunning. Nice environment too.

What’s the best thing about London?

What’s the worst thing about London?

The fact that despite its open minded tradition London voted for the vile Boris Johnson for mayor. A ghastly, horrible man.

Where is the most relaxing place in town?

Holland Park which is a peaceful oasis near where I live in London which also features the tranquil Japanese style Kyoto Garden. Well worth discovering if you don’t know it. Was also the place where hippies in the 60s went to take acid...

Bocca Di Lupo in Soho, which is a simply outstanding Italian restaurant, with its own unique menu based on regional specialities. One of the things we like is that each of dishes has a choice between a full portion and a small portion, and we go for a variety of small portions, tapas style. Fantastic Italian wines too...

If I could change one thing about London…

One thing everyone should do in London is…

They should go across Waterloo Bridge and look at the view on both sides.