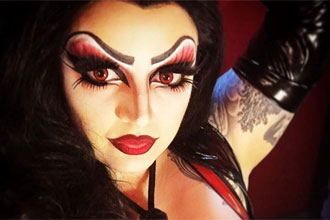 Mynxie is the satanic sex symbol the queer scene deserves, bringing her dark energy to clubland through performances and drag creations. A regular at Berlin Berlin alongside the dark creatures of Monster Queen, she will be back at Egg LDN on Saturday 27th April hosting their decadent day party, Gold Diggers which kicks off the Egg LDN Birthday proceedings.

So I usually use the term 'Professional Goth' because I practise various different performance disciplines, but they're all rooted in the same darkness and gothic glamour. It all really depends on the space, the crowd and the style of gig as to what sort of thing I'll be doing, but it can range from fire, gore and drag-style lip sync through to fetish and striptease, or even club hosting and DJ-ing. 'Shock' I guess is subjective, as there are a lot of audiences who find some of my stuff 'shocking', but some who want things as extreme as possible.

What inspires you in your work and how do you develop it especially when related to live performances such as at Gold Diggers?

I'm inspired by so much around me, as I'm very lucky to be surrounded by talented and creative forces who are constantly raising their game. I guess I was originally influenced by a sort of venn diagram of niche queer media, camp horror B-movies, dark cabaret - both as a musical genre and a theatrical style - and gothic subculture. I felt like I was plonked in the middle of that venn diagram and over the years that sort of developed me into this drag horror mistress type personality. With parties like Berlin Berlin and Gold Diggers, it's all about harnessing those influences and creating something with a dark energy that can be easily performed in a club environment, but still gives viewers a stand alone experience.

I dropped out of school when I was 16 and went straight to drama college, graduating at 19 and moving to London. From then I just gradually learned more about cabaret and the club scene, and did my best to self-teach myself new disciplines to move away from traditional performing and more into drag and freakshow. For me, I think the 'allure' is basically having a way of channelling my creativity in this alternative way and making something that's entirely my own work, rather than fitting moulds for a casting director like I learned at college. For an audience, I guess it's a form of escapism and a way to join in with an environment which encourages freedom of expression.

As a teen I was first introduced to queer culture through things like Hedwig & The Angry Inch, and the Rocky Horror Picture Show. The internet wasn't as comprehensive back then and I didn't have the kind of pocket money that would allow buying loads of CDs and DVDs, so I mainly discovered new things through online forums, or older cousins who were alternative and taught me about heavy bands. I think a real turning point for me was being in the middle of a Weimar Cabaret research binge and simultaneously discovering the Dresden Dolls. All too often the artistic things I was seeing, fab as they were, were fronted by male bodies, so I struggled to see myself articulating my own sort of path until I saw Amanda Palmer not only leading a dark cabaret style punk outfit, but also breaking a lot of the rules while doing it. I remember going to see her show in Edinburgh and she had used electrical tape to alter the brand name of her keyboard so that it said KURT WEILL, and my teenage brain absolutely exploded knowing that other people were into the same stuff, AND they happened to be strong women who were making a living from it. I think about that a lot, actually, and how important it was for me to see that, so whenever I'm making new work I always think that in my own way, maybe I can be somebody else's brain explosion moment.

Known for your jaw-dropping outfits and wild performances, where do you get your inspirations from? Do you create your own outfits or do you work with specific designers?

I've had a couple of pieces made for me by talented friends, or bought from fetish designers, but generally speaking I just wouldn't be able to fund doing that all the time with the amount of different looks I need to pull every month. I have basic sewing skills and a keen eye for what I want/need/am looking for, so I usually just stay alert when I'm in shops or online for a good bargain that I can customise and create a new fantasy from. That sort of defines drag for me, really - creating fantasies from very little.

Sum up what makes a good party?

Stage management! A lot of work goes on behind the scenes to bring these parties to life, even though it may seem spontaneous and easy on the night. It's important to have curated a good team of talented creatives, have everything sorted in terms of logistics and keep an eye out to make sure there are no issues and everyone is having a good time. That's all part of our jobs as professional party people, to make sure everyone has the best time possible!

I think specifically in the sort of scenes I'm involved in, it's almost fundamental to the safety of queer and alternative people. We need safe spaces in which to express ourselves, build communities and create, especially in the current social and political climate. For those who are marginalised, friendship and safety is usually found within subcultures and without spaces like these, a lot of us would find ourselves lost and less able to resist a system which doesn't necessarily allow us to thrive.