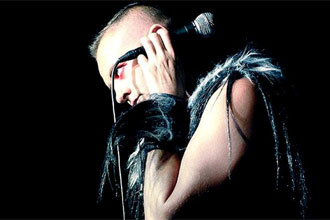 Avant-garde party brand Berlin Berlin: The Birthday promises to be an unrestrained celebration inspired by Berlin’s music and culture with a line-up that welcomes the debut of TrashEra with DJs Deepneue, Lipstick Trash, Flavia Laus, performer, Tristan, visuals by Stasys Zak I Syrtha and hostess, Madame Trash as well as welcoming NagNagNag’s Jonny Slut for an Extended set.

Legendary founder and DJ of London’s hugely influential queer electro clash club Nag Nag Nag and original goth, known for his ‘death-hawk’ hair Johnny Slut, chats to us ahead of his debut set.

Jonny was an original member of 80’s Batcave club resident band, Specimen, and has also worked with The KLF and Adamski. We catch up with him for a quick chat to find out a bit more about his latest projects..

Making your debut at the Berlin Berlin Birthday event on Saturday August 24th, for those that might not have come across you before, how would you best describe who you are and what you’re going to bring to party?

I'm an 80's goth pin-up & style icon from The Batcave that got lucky again in 2002 with my trailblazing electro night Nag Nag Nag! Seriously though I think having good taste in music and a bit of personality are the two most important thing a DJ can bring to the party.


Behind London’s iconic electro clash club Nag Nag Nag, what inspired you to set this up and what highlights can you recall including great memories, special tracks and guest DJs that you connected with?

I'd always liked new wave/post punk sounding dance stuff, and in 2001 I heard Pete Tong on Radio 1 play two particular tracks. One was ‘Emerge’ by Fischerspooner and the other ‘Hand To Phone’ by Adult. They really made me sit up and listen and think 'fuck! I need to get my shit together and start a club night playing this kind of stuff’. There seemed to be something in the air where dance music began to seem more flamboyant and interesting again.

NagNagNag became a success pretty quickly, and soon the queues were round the block and the likes of Bjork , Kate Moss, The Pet Shop Boys and Boy George were regulars. We had Madonna's producer Jaques Lu Cont DJ and she came down heavily disguised with her hands wrapped in bandages. DJ Hell played for us and he released my band Atomizer's single 'Hooked on Radiation' on his International DJ Gigolos label which at the time was the hottest label around. We also had my favourite artist of the time Vitalic to play. I also managed to get two of my favourite goth/new wave artists The Virgin Prunes & Marc Almond down to spin which was like a dream come true.

Known for your ‘cascading waterfall fringe and 'car-crash' make up’, do you think expressing yourself through your look and clothes is still very important?

I think the dressing up element to going out clubbing is really important. All the best clubs over time from The Blitz, Batcave, Taboo, Kinky Gerlinky to NagNagNag all attracted a flamboyant clientele and were run by big personalities. That's what I like now about clubs like Berlin Berlin & Monster Queen, they have that same aesthetic.

An original part of London’s goth scene, playing with the band Specimen, how did you first get into music and how did you get into playing the keyboards?

As a teenager all I ever wanted was to be in a band, and on my second visit to The Batcave I was approached by the singer of Specimen and asked if I'd like to join. I'd never played keyboards before although all of my musical influences from around then were very synth orientated, and I figured it couldn't be that hard! Obviously at first my contribution was mainly a visual one, but that was very much an integral part of what Specimen were about.


Why do you think the electro sound is still so popular and which current artists are you into and what makes them stand out?

I think the electro sound is quite versatile and to me it has a certain warmth , with sounds that I find really appealing. It was hearing the Israeli duo Red Axes a few years back that got me into DJ-ing again. Their overall sound really chimed with me. Again lots of new wave influences (they even did a track with 80's icon Gina X) and it transpired they had covered Bauhaus' Bela Lugosi's Dead and had an album called ‘Beach Goths’, so we were definitely on the same page. I've always liked female vocals so I really enjoy stuff by C.A.R, The Golden Filter and Boy Harsher, quite minimal electro stuff.

And before you leave us can you tell us your current 3 fave tracks?