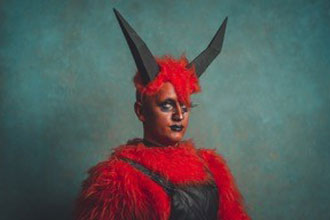 One of the leading lights in London’s avant-garde performance scene who started painting his face and going night clubbing because he got alopecia, the inimitable Luke Harris, lives and breathes body art.

His outré appearances and incredible talent for creating new and hugely unusual looks has seen him perform at the legendary Black Cap pub, Milkshake Festival in Amsterdam, Sink The Pink and of course Egg London’s flagship event, Berlin Berlin, as well as at annual events such as the Life Ball and Pride.

We catch up with Luke ahead of his performance at the Berlin Berlin Halloween Special on Saturday October 19th to hear how he comes up with ideas and the power of dressing up.

Great to catch up with you Luke Harris and how did you first start working with the Berlin Berlin family and what makes this event so different and special?

I used to host at the Gold Diggers event for Egg LDN and then Berlin Berlin started and I went to support friends performing in the Kuntskammer room. I think by the second event I’d been noticed by the looks I was creating and invited to host. I’ve been turning it out and flapping my arms around for Berlin Berlin ever since.

I understand you’re an original performer and Exclusive host of the Berlin Berlin events and can you tell us about your personal highlights and memories of the parties?

There have been soooo many crazy parties there. The first night that Monster Queen got a room was amazing, because it suddenly switched up the vibe and gave some darkness to club. Another night was when I danced with friends in the wrestling ring as the sun came up under the open roof in the Garden.

Known for your unique looks and outlandish make up, how long does it take you to come up with your look (which I understand is different) for each Berlin Berlin events and do you have anything special in mind for the Halloween Special on Saturday 19th? And how long will it take you to get ready on the day?

I’m quite a last-minute person when it comes to looks, normally always up late the night before the event sewing/glueing final pieces together. If I have an idea I know is a bit more involved crafting wise I’ll try start early that week, some looks I may only have the day of the event to put together.

I’m a sucker for something creepy so Halloween is one of my favourite nights of the year for creating something really wild.

Every look you bring has its unique style and where do you draw inspiration from and how do you come up with different concepts and ideas?

Themes help a lot, I’m always thinking of looks I want to do but deciding on just one is difficult. Inspiration strikes quite quickly for me, like a certain fabric, texture or colour I’ve spotted somewhere will send my mind wild, then I mash with ideas I’ve had and turn it all into some kind of fantasy creature.

Do you think the crowd react and make more of an effort when they are inspired by club performers such as yourself?

It’s not expected that you have to dress up but on a night like Halloween, a little bit of make up, black clothing or something that celebrates this night really adds to the experience. I hope that seeing all these creatures stomping the stage and buzzing through the club does encourage people to get inspired and also turn looks. Berlin Berlin has attracted a great scene of people who do, other performers and artists. When the club is full of looks and costumes it’s kind of like being in a musical, or weird movie ball scene, just a lot more alcohol and definitely not PG friendly.

What has been your most shocking look to date and what were people’s reactions like? Have reactions unsettled you or put you off expressing yourself?

My looks normally render me unrecognisable, which is a hindrance and a blessing at the same time. Peoples’ reactions are a lot more honest when they don’t recognise the human underneath. I once went as a princess naked mole-rat (my gay animal familiar). Full prosthetic nose and teeth, latex fleshy crown and pink silk robe. When I got on stage covering my face I turned to blow a kiss, dropped the robe and revealed the prosthetics, I expected a big reaction which I received. However most of the attention was to the 6 scribbled on nipples I had given myself. I can never predict which reaction I’m going to get that night but I always aim to spark something.

And lastly any tips about how best to enjoy the Berlin Berlin Birthday?

Dress up! See the shows, Be Happy, it’s hard not to and Respect each other’s space.