Your All In London guide to Leyton 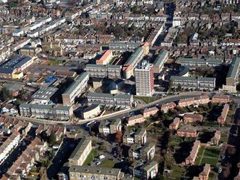 Leyton doesn’t seem to have much luck. It suffered from heavy bombing in both world wars, is a known spot for gang-related crime and theft, and is one of London’s poorest areas; even its football team, Leyton Orient, struggle through each season. Cheap house prices have meant the area is home to many different low-income groups including including Eastern European, Caribbean, African and Asian communities, as well as a young student/backpacker community, mostly from Australia and South Africa. The two main sections are the retail park, which has an Asda, TK Maxx and Fitness First, and the Baker’s Arms junction, where there are shops and cafes of varying degrees of appeal. Many of the tower blocks have been demolished in a bid to redevelop, however Leyton doesn’t seem to be reflecting any of the sheen of its Olympic-hosting neighbours.

Going out in Leyton