Your All In London guide to Stanmore 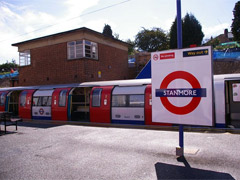 The district of Stanmore was originally called ‘Stanmere’ meaning ‘Stony pool’, according to the Domesday Book. Today, Stanmore is a suburban district situated to the north west of London and it remains relatively quiet and peaceful despite its fast transport links to the City.

Stanmore Station opened in 1932 and this has encouraged commuters who prefer the quieter life whilst still being within a stone’s throw of London’s city centre. Today, Stanmore is predominately residential with generally affluent housing and a large choice of boutique shops, restaurants and cafés. Neighbouring districts include Edgware, Bushey and Kenton.

Going out in Stanmore

Somerset House's large-scale installation
Sign up for the latest
Sign up to our newsletter for the latest and greatest from London!
By entering your email address you agree to our Terms of Use and Privacy Policy and consent to receive email updates and newsletters from All In London. You can unsubscribe at any time.