Your All In London guide to Stoke Newington 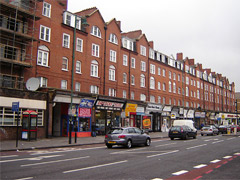 Largely defined as the post code area of N16, Stoke Newington is part of the London Borough of Hackney. As well as being a popular commuter region, Stoke Newington is also one of the most diverse districts of the city with a multi-cultural feel including many Irish, Jewish and Asian communities.

As naturally as Stoke Newington Road is the continuation of Dalston’s Kingsland Road, so the trendy coffee shops and bars continue for a little while, however you soon start to come across Jewish bakeries, Polish delis and Caribbean restaurants instead of organic juice bars. East of the high street is fashionable Stoke Newington Church Street, lined with pricey boutiques and yummy mummies pushing prams; the area overall has a curious mix of middle class residents, immigrants and less wealthy inhabitants and its previously bohemian image has been threatened since the yuppies moved in during the 1980s. Stoke Newington has plenty of parks, the biggest being Clissold Park, and entertainment-wise it is also home to The Vortex, one of London’s best jazz clubs.

Going out in Stoke Newington

What's On in Stoke Newington

Stoke Newington is in...