Your All In London guide to Walton on Thames 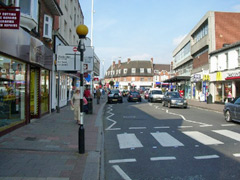 This town to the south west of the capital is bordered by countryside and is very picturesque, particularly by the river. The greenery of the surroundings contribute to the villagey atmosphere and the quiet streets are beloved of the locals; while it’s far from the bustle of the city, London can be reached in under half an hour on the train. Residents are mostly middle class young professionals and families who have been attracted by the local amenities and favourable property prices compared to neighbouring Esher and Weybridge. However, the super-wealthy have also made it their home with areas such as The Ashleys and Burwood Park boasting one multi-million pound property after the next.

The town centre has been the focus of massive renovation and investment of late, which has resulted in the arrival of new restaurant and shops of the chain variety, The Heart Shopping Centre with well-to-do names such as Boden and L.K.Bennett and new boutique outlets such as Flours Artisan Bakery and the Naked Grocer!

Going out in Walton on Thames

Walton on Thames is in...