Top Of The Town 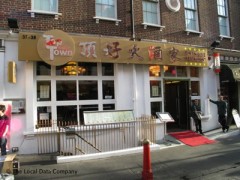 Reviewed by Anonymous
two of us visited on the 24/06/09 and had the £17 banquet and glass of wine.
Starters good but very small portion. Duck and pancakes on cold plate and minimal duck. Service too fast, dishes followed each too rapidly.
Waited ages for glasses of water which were warm, ugh!
Main couse nice but not great.
Service poor and totally disinterested.
We were not offered desert or coffee just presented with the bill where 12% service carge had been added!
The pleasantess person was the old lady washing dishes in the kitchen.
As I said not terrible but not good enough to return. i would suggest you go elsewhere amd don't be charmed in by the lovely lady outside promosing you

Reviewed by Anonymous
Keep Out!! It looked ok through the window on the street but like others we were brought up to the top floor which is a bit shabby. The service was very poor. Some examples. There were 4 of us but only 3 starters arrived. We had them eaten before the 4th one came. We were on our mains before our drinks and wine came. I asked for a bowl of water for my son who was getting messed up from spare ribs. Most chinese restuarants bring this out automatically and with lemon or something in it. I never got the water. The waiter looked at me as if I had lost the plot. One of the plates and one of the forks were dirty from our starter food. When we handed them back across the table to the waitress who was dishing the rice for our mains but she pushed the plate back at me and threw the fork back to my son. The food was poor. My chicken was rubbery, grainy meat. My son's chicken chow mein was chickenless chow mein and the noodles were not really cooked. Without deserts and coffees it still came to £116 for the &quot;pleasure&quot; of the experience.

Reviewed by Anonymous
I love this establishment, its Dim Sum at lunchtime is excellent with respect to its quality and value.

Reviewed by jerseyfinn
We visit TOT whenever we visit London. We find the food quality and customer service to be consistently good. The menu is varied &amp; can fit both vegitarians &amp; meat eaters. We ourselves enjoy the set menus.

Again, I emphasize that the service here has always been prompt and attentive and in our observations, the diners here are happy with their food. I would highly reccomend TOT for anyone hankering Chinese food. It's especially busy on theater nights. Although things look chaotic in the dining room, they have it all under control.

As an aside, I would like to note that one annonymous poster here continues to post 3 separate disparaging reviews of TOT. I readily admit that dining is a subjective experience, subject to aesthetic discrepencies. I hope that folks look closely at who posts here an not at shotgun reviews meant to sink the boat.

Try Top of the Town and come to your own conclusion just as my wife &amp; I have done during our own London visits. I think most folks will enjoy the food.

Reviewed by Anonymous
I attended Top Of The Town as a group of four on a busy Saturday evening - 8th Nov 2008 The meal was stressfully rushed in order to clear our table for the next set of quick turn-arounds. An example was the Crispy Duck for four being served on a stone cold dish along with cold plates. I asked the staff why this was so and was told this was normal practice. This typified the style of the meal in general. I think customers should be treated with a little more respect, roll on the recession if only it brings better service from this type of restaurant who at the moment don't care about return visits.

Reviewed by Anonymous
Raw noodles, tastless beef, rude staff. Duck was nice but you can't go that wrong with deep fried? Even the homeless guy refused my leftovers.

Reviewed by Anonymous
I took my family there before a theatre visit, we were in a bit of a hurry and told the staff this, they responded well, the food was very nice and the price reasonable - I recommend

Reviewed by clw
I recommend that nobody enters this restaurant. The reasons for this are as follows: we were discriminated against as a group by extremely rude, pushy and disrespectful staff (we had a man in a wheelchair with us), we were made to feel unwelcome and asked to sit at the back of the restaurant 'out of sight', we were pulled, poked and pushed around by the staff (yes -really), and we were threatened with table charges for taking up more than one table -the restaurant was empty and we only needed 2 tables. I have never had to endure such rudeness and disrespect as we were subjected to on our visit. we walked out of the restaurant never to return again, as we still had not had our orders taken.