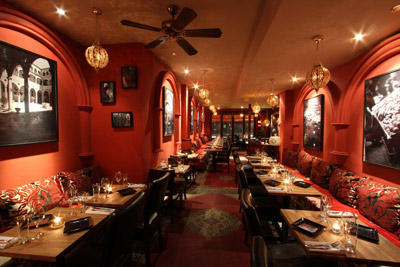 Maison Touareg has been bringing a taste of Morocco to Soho since 1985. With its plush furnishings, authentic food, al fresco dining and buzzing night-life, step out of London and into Morocco. Let your hair down, indulge your senses and unwind at the end of a hectic year.
Situated on the famous Old Compton Street, Maison Touareg is a two level restaurant/bar open till 3am (Mon-Sat). Ground floor restaurant is ideal for groups of up to 60 guests. Full glass frontage creates a perfect place to dine while the city drifts away on a cold winter evening. The downstairs bar suitable for groups of up to 70 guests, with its lavish surroundings, cosy sofas and low seating is perfectly suited for an informal party. After your meal, it is encouraged for you to dance the night away on our tables while our resident DJ plays the right music for the celebratory atmosphere. 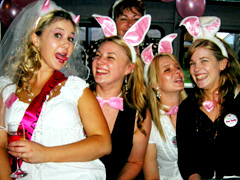 This Lebanese restaurant in Soho has stag and hen packages that include belly dancers, and the very brave may even want to attempt a belly dancing lesson. 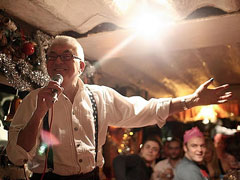 The most fun you can have whilst eating in London

Chuckle as you chomp

Belly dancing is a bit like Marmite: generally you either love it or loathe it. If you find the sight of women gyrating their hips to Middle Eastern music embarrassing then avoid Maison Touareg from Thursday to Saturday, or head to the shisha terrace where alcoholic varieties like champagne shisha are served. It’s open till late, so you can eat, drink, smoke and dance till 3 am at weekends.

Reviewed by rachel from croydon
The food was very salty and had no flavour and was very over priced for what we received. Waiters were impersonaland not much help and we had to pay 12.5% service charge. Would not recommend it.

Reviewed by Anonymous
The restaurant is under a new management by now and I can't say anything bad about it really! Went there with some friends the other night and had delicious food. Didn't have to wait long for anything we ordered. Went to the bar downstairs after the meal for the chill-out part. The whole place has a lovely authentic North African feel about it. Like many Moroccan/ Lebanese restaurants, the decoration is impeccable and at night with candles it creates a romantic and relaxed atmosphere. Just lovely! Great night and will surely go again sometime soon.

Reviewed by Anonymous
I have lived few years in morocco so i can can compare.
It is definitely not the best couscous that i have ever eat but it taste close enough to the local one to be good and bring back a bit of sun in my mouth.
It is probably more a lack of sun in the vegetables here ;)
the harrira soup is the true one and i just love that.

So i will go back surely

Reviewed by Anonymous
First impression was lovely and waiting staff were very friendly. But the managers aggressive, unprofessional behaviour left us with a very bad feeling about this restaurant and it was very clear the waiters can't keep the tips customers leave as we tried to do. Shame as the food was quite nice but would not recommend this to anybody if you want to enjoy a lovely evening.

Reviewed by Anonymous
Recently I dined here with a small group of friends. We were all well-dressed, well-behaved, and eager for a good meal (theoretically the ideal customers). That said, we went on to have one of the worst dining experiences any of us could remember.
The restaurant keeps room temperature bottles of water on the table. As we are all londoners, we asked for tap water. They waiter proceeded to argue with us, telling us there was water on the table. After he removed the four unwanted, unopened bottles (2 still, 2 sparkling) the owner tried to charge us for them, claiming that since they weren't on our table, we must have drunk them.
The food is okay. One is far better off going to Edgware Road and getting a similar menu with much better quality food. Our food came out in bizarre intervals. The hoummus and other starters arrived fifteen minutes before the accompanying breads. Half the table was served five minutes before the other half. At one point, a lady at our table tried to cancel an order for a side (since we had all finished eating and it had still not arrived). She was met with an argument, both from the waiter and the owner (who seems entirely unaware that 'the customer is always right'). They claimed it was not their fault and that the kitchen was busy (the restaurant was 70% full). He actually argued, going so far as to raise his voice (note: he wasnt even standing by us at our table but, rather, across the room).
I could go on. Out of letters. Dont

Reviewed by couscouslover
Great atmosphere and good choice of food, which was delicious and not overly priced (but I think you have to pay for the bottles of water convienently set on the tables so check before opening). Service was fine - 7.00 on a saturday night, place was almost full and we didn't have to wait for long for anything. The only downside was the toilets - not brilliant but definatley not the worst I've ever encountered.
All in all I'd recommend it for it's calm ambiance and good food.

Reviewed by vmp
The food was excelent. Delicious, nicely served and the quantity was more than enough. The waiters were polite and helpful and the overall atmosphere was very pleasant.
I did not liked the low tables, the stools half of the party had to sit. It was also quite expensive around 40 pounds per person.

Reviewed by Lkate
The plates were dusty (the table had obviously been set hours before). The food and drinks were overpriced and not that great. The manager/waiter was rude from the start. Mineral water is placed on tables to convince you to open it and therfore pay for it. Said waiter was very put out when we asked for a jug of tap water. My main criticism however: my friend was playing with the candle. At the end of the meal the waiter tried to make her pay £5 for it!!! My advice is not to go near this place with its miserly and miserable waiter, poor service and below standard food!

Reviewed by John Dangerfield
A disasterous night out at this restaurant. Cold, cramped, dark, expensive and with meagre portions of food. With a few glasses of wine, the bill came to £40 each - about £35 more than it was woth. Avoid at all costs.

Reviewed by RobM
Unbelievably bad service from a rude and obnoxious waiter who had no qualms about shifting entire tables of people to suit his bad organisation, and a clueless waitress who could not inform you what you were being handed. Portion sizes that were a joke. Cramped conditions that were on the point of being painful with 25 people expected to fit around space for 10, the toilets a disgrace, and the gale blowing in from the kitchen freezing all. Need I go on? I've had more satisfying and enriching dining out in Burger King.

Reviewed by Ian Wright
Very disappointing. Not suitable for large parties or if you are hungry. Staff are very rude and service is exceptionally slow. A party of 23 where sat at a table more suitable for 10. It took over an hour before a drinks order was taken and the entire ordeal took more than 4 hours. It's a shame as the food wasn't bad but there was no where near enough and it was cold when served. Avoid

Reviewed by LubaG
Incredibly expensive, rude staff and uninspired food meant that my birthday party was unenjoyable to say the least. I strongly recommend readers to spend your hard-earned money elsewhere.

Reviewed by pika
15 of us come to eat here for a birthday and the place was amazingly cramped and very uncomforatble.

as i have limited space i will be brief. starters bad
The bill, for 15 without drinks !! was 360 !!! astounding, seeing as most food was appaling. I tried every ones food to see how low this place can go. steak was rock hard. chicken and olives sick. lamb and prunes. offensive to the system

Do yourself a favour and avoid

Reviewed by kerstin.kuhn
My birthday dinner at Maison Touargue was more than disappointing. The staff wer rude and left us to order drinks at the bar. The £20 two course menu included great starters but the main course wasn?t nearly enough to satisfy the even remotely hungry. The vegetarians got a bowl of couscous and what seemed like canned vegetables in brine. The toilets were nasty, the kind you'd expect in Bangladesh not in the middle of Soho.