I loved the romantic, classically French décor and atmosphere... 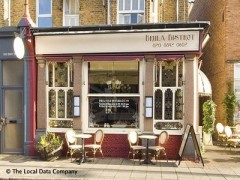 Ads by Google
Tweet
About: Brula Bistrot is a restaurant located in St. Margaret which set in an intimate and traditionally French style serving French cuisine.

"I loved the romantic, classically French décor and atmosphere..."

St Margaret’s is a small town nestled next to Twickenham and just across the river from Richmond and is well served with a few excellent restaurants. So I was keen to try this one out as it is highly rated by some authorities.

My friend was seeking a possible location for a private party – and there are private rooms for hire here – so it seemed like a good excuse to try it out. My first impressions were favourable – the décor is lovely. There’s a beautiful glass tiled canopy to the side entrance outside and when you walk in it feels like you are entering a traditional French restaurant – dark wood simple furniture, stunning stained glass windows and a parquet floor. My friend said it felt “intimidatingly posh”.

The waiter was very young and obviously French – his English wasn’t great which meant that there was a little mix up about how many of us there were and which table we were going to. However, the very English manager took us to a perfectly positioned corner table. And top marks for not batting an eyelid as my companion had come on his bicycle and was attired accordingly.

I liked the sprig of mint in the water jug and whilst the bread was fresh I thought the wire mesh basket a little basic. On a Tuesday evening at 730pm there was just two other tables occupied – one with two girls and another with three people. It did fill up pretty quick though – a combination of couples and groups. Everyone looked pretty well off.

My companion was a little perturbed that there were only two choices of beer on the menu – he chose a Meteor (£4). The wine selection was pretty good although as only I was drinking I didn’t want to order a bottle so selected a glass of Le Fumé Blanc, Sauvignon Blanc, Pays D’Oc, 2011 (£8). We had another round during the evening.

My companion opted for the Devonshire crab mayonnaise with celeriac rémoulade, curried vinaigrette, capers and radish (£9.50). It was very cold and the celeriac gave it a nice crunchy texture and the wafer thin radish and capers dressed it well. My companion was less enthusiastic about it although he conceded that his cold may have impaired his sense of taste.

My chicken liver parfait with onion marmalade and toasted brioche (£7.00) was ultra-light and smooth, and not too strong. The marmalade was delicious although the brioche was a little too crisp for me.

As it’s nearly Christmas I ordered the Volaille de Noel – a three bird roast: Rolled Barbary duck, Norfolk chicken and turkey, stuffing with honey parsnips, bread sauce and red cabbage (£17.50) – I felt that the meat was rather overdone. The spiced red cabbage was a triumph of texture and flavour. The side dish of Dauphinoise (£4) contained two rectangles of fairly heavy but cheesy potatoes and I prefer to see the layers and a lighter, crisper consistency. The French beans (£3.50) had a perfect bite and just enough garlic.

My companion fared less well with his chargrilled Onglet steak frites with garlic butter and a watercress, radish & shallot salad (£16) which is served rare (and it was very rare). He felt it was gelatinous. Mustard was provided when requested. The frites looked like they had come from a fast food store but were actually lightly crunchy on the outside and fluffy on the inside.

With a £1 donation to Street Smart and 12.5% service the total bull came to £92.25 which we felt was a little high. He’s decided to host his party in nearby Petersham.

I loved the romantic, classically French décor and atmosphere and the friendly (he joined in our conversation about Roman roads in Brentford!) manager although I was a little disappointed with the food.