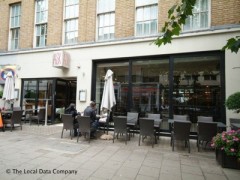 Ads by Google
Tweet
About: ASK is a restaurant that serves a variety of pasta dishes and pizzas with thick toppings. They also have a licensed bar area. They can cater for private parties of up to 46 people and provide outside seating on the pavement. A takeaway facility is available.

The Latest User Reviews of ASK

I've been going to this restaurant for over 5 years. It is always a pleasure for a hassle-free, delicious and inexpensive meal. The staff are always friendly and welcoming, the food is fresh and yummy. No one ever hurries you, they're not concerned if your entire party doesn't arrive at once, they let you fiddle around with swapping pasta/sauce combinations if you want penne not spaghetti with your sauce.
Some people from my former work-place always wanted to go to slightly fancier establishments for work-dos, and frankly I'd always have preferred to go to this Ask. It's just so reliable. I've had work-dos, birthdays, quiet dinners with friends, business lunches here, and it's been great every time.
Added on Sun 04 Apr 2010 at 23:36:38 [report] [respond]
User Rating: 8 / 10

I am a regular at this particular ASK restaurant in Grafton Way, I believe the food and service are both very good, my only complaint would be that the seating/table areas are a bit cramped and sometimes feel that the persons on the table next door is listening to your conversation otherwise the hospitality of the staff is great.
Added on Mon 30 Nov 2009 at 14:23:17 [report] [respond]
User Rating: 2 / 10

Arrived at 12pm - restaurant was nearly empty. Drinks brought straight away. Waited 20 minutes for our starter of olives. Waited a further 25 minutes for our main courses of simple cold salads and they were brought only when I complained to the waitress - other people who came in after us were served before us - even with hot food. Waitress even forgot to bring the salad dressing after asking us if we wanted some.
By this time the restaurant was full and many were complaining that their orders hadn't arrived or hadn't been taken. Didn't seem to be many waiting staff and those they had were totally disorganised.
They seem to have a policy of serving the drinks straight away to stop people walking out.
The ambiance was horrible. Tinny music played through a loud speaker - at first I mistook it for someone's ringtone or workman's radio outside - extremely irritating.
Salads were awful - might as well have bought a bag from a supermarket. Avocado was hard and salad was full of sliced onion and cabbage. Presentation was awful - hacked up bits of tomato and cucumber.
Altogether a waste of time and money - would not even eat there again even for free! Staff were polite which is the only reason it I have given it any marks at all!