Dim sum afficianados will undoubtedly be well-versed in the menus of Ping Pong... 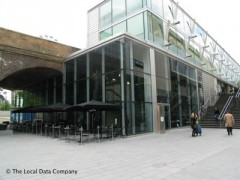 Ads by Google
Tweet
About: The Ping Pong restaurant in London serves exquisite Chinese dishes, delicious dim sum, fragrant teas and sensational cocktails at it's stylish venue in Southbank. Ping Pong is one of the leading Chinese restaurants in London.

"Dim sum afficianados will undoubtedly be well-versed in the menus of Ping Pong..."

Dim sum afficianados will undoubtedly be well-versed in the menus of Ping Pong. With nine restaurants around London the chain has become synonymous with tasty, affordable menus, but this spring they’ve launched their Innocent Indulgent menu offering something a little bit lighter for those who fancy embracing healthy hedonism.

While it wouldn’t be my first port of call for a healthier meal, it’s good to have the option of a few lighter dishes to go alongside the standard fare, the best of which do tend to be the little fried parcels of deliciousness. With Innocent Indulgent dishes including things like a Purple Power Chicken Salad (£5.95) of rice berry, smoked almond, black eye beans, sugar snap peas and rocket, it’s certainly not boring.

I paid a visit on a recent Saturday lunchtime; rookie error in that it was never going to be quiet visitng the South Bank branch (note to self: hangover + hyperactive weekend children + family restaurant = not ideal) but the service was fast and the food good.In a bid to couteract the effects of the night before I tried a Booster Juice, including wheatgrass, vitamin B12, new ingredient DMAE - a natural ingredient that apparently boosts memory and skin elasticity - honey, banana, almond milk and yoghurt. So far, so tasty.

The Innocent Indulgence menu’s Rainbow Salad is a brain-boosting combo of spinach, beetroot, carrot, bean curd, red cabbage, rocket, cucumber, bean sprouts and pomegranate with peanut and lime satay sauce, a big dish of colourful crunch, though it could do with being pre mixed so you get a little bit of everything in each bite while the crispy fried aubgerine with hoi sin sauce and a hint of sichuan chilli is just fried enough to feel a little bit naughty.

Of course, the Innocent Indulgence menu is only really meant as an accompaniment to the classic menu, so we obviously indulged in some favourites as well. The cirspy duck bao and honey glazed pork puffs never fail to disappoint, with the former a tasty upgrade to the standard pancake and the latter always perfectly sweet, sticky and melt in the mouth. I tried the Shanghai xiaolongbao for the first time, a traditional Shanghainese soup dumpling with pork, ginger, spring onion in wheat pastry, with chinkiang vinegar and ginger - certainly flavourful, but slightly tricky to eat without leaking the soup out everywhere en route to your mouth. Be warned. I’m a big fan of the crunchy golden dumpling, crispy stir fried veg in a turmeric pastry but, to be honest, the majority of the menu is good; I could sit here all day rattling of the best dishes but you’re probably better off heading out to try it for yourself.

While it not be the most high brow restauant in the world, for tasty, affordable, fast and family-friendly dim sum, Ping Pong’s got it covered. Just avoid the South Bank branch on a Saturday lunchtime if you have a raging hangover and don’t want to be in the presence of children…

"A healthy and tasty experience..."

With the next day being Chinese New Year I persuaded my companions to venture into Ping Pong - the newish Dim Sum experience not far from the BFI on the South Bank (although there are branches springing up all over London).

It's really great there. Unpretentious. Not too expensive. Friendly. Trendy. Young. Healthy. International. And really buzzing with couples and groups.

We had drinks upstairs (they move you here while you wait for your table) - the Kumquat Mojitos are thoroughly recommended and have become the mojito against which all others are measured. The new Ratini cocktail was a little less enthusiastically received, although the Americans sharing our table seemed happy enough with their candy rats.

Then you have to go back downstairs to the tables – small squares for twos and threes down the quieter corridor and round tables for eight people to share in the main restaurant area. All seats are low stools although they are quite big.

Rather than a menu, you are given a little piece of paper and a pencil. Items are helpfully grouped into categories such as nibbles and soups, baked and steamed, fried, signature dishes, vegetables and side dishes etc. Each dish is priced around £3. We loved the "pick and mix" approach to choosing tasty little dishes - all of which come in three portions. My companions were vegetarian and the choice was incredible. I loved the sweetcorn and coriander parcels, and the sticky rice in leaves is awesome.

A healthy and tasty experience - and the flowering teas provided much amusement (although the fresh mint tea is the real clean palate taste phenomenon). Not the place to spend an entire evening, but in between drinks and dancing or for meeting up informally with a group of friends during the day or in the evening it is perfect!

A bustling place to come on a Friday or Saturday night for food - very buzzy atmosphere and efficient and friendly staff - even when busy!

Good choice on the menu and well executed. Good beers too.