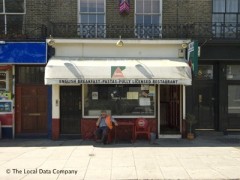 Ads by Google
Tweet
About: A Baia Restaurant serve a variety of Portuguese and Italian dishes and can cater for private parties of up to 50 seated guests upon request. A takeaway menu is also provided.

The Latest User Reviews of A Baia Restaurant

Absolute gem of a restaurant / cafe.

Doesn't look like much from the outside but go in and it's just like you're on holiday in Madeira. And it's even cheaper!!!

Last night me & the missus had a full-on slap-up dinner with steak / fish / pasta / salad, I had 2 beers, coffee & a pud for TWENTY SIX QUID! That is ridiculous.

Cheap at half the price. P'raps not the best of locations (not near any tubes) but if you find yourself in the area, go here! Go early as they can close before 8pm some nights. Don't be put off by their not speaking completely fluent English -like I said, it's just like being on holiday (and the menu is is Portuguese AND English)!

Dev does Dickens: The Personal History of David Copperfield

On Oxford Street? Take a detour and explore the history of nursing
More features and events