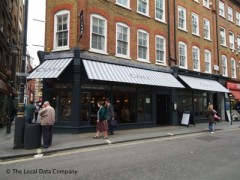 Ads by Google
Tweet
About: Côte welcomes guests from breakfast right through to dinner. The brasserie takes on a contemporary twist and offers a comprehensive menu of classic French dishes, freshly made using high-quality ingredients. Priding themselves on exceeding the expectations of every one of their guests, Côte is a friendly and welcoming place to eat.

Cote was the only restaurant which wasn’t full to capacity on this busy Friday night at 10pm. A fact which we welcomed, as it was chilly and we wanted food, but also worried us slightly. There were queues for most restaurants on Wardour Street and Dean Street at this time, what was wrong with this one?

We took the plunge in the end and went in, as the French menu looked appealing. Within a few minutes I realised why it was so empty, our waiter asked us three times in the space of 10 minutes whether we were ready to order. Clearly they had a habit of frogmarching diners out of here.

Perhaps out of embarrassment or not wanting to rock the boat, we skipped starters and went straight to ordering mains of roast duck breast for my companion and the special of the day for me: salmon fishcake on a bed of spinach with a poached egg. I also ordered a side of potato gratin as the mains here are served on their own. They are also very small.

My fishcake landed in front of me with what looked like a whirl of sour cream on top. I cut into it and began to wonder what the hell had happened to my egg, until I realised the egg was the whirl on top. It had been overcooked to the point where its rubbery texture had set into the shape of a meringue. I then chose to refrain from trying my friend’s duck, however he assured me it was tasty.

The price of the meal came to around £25, which I now wish I had spent elsewhere, even if it did mean standing in a queue in the wind for 20 minutes. I will pay heed to my better instincts next time…

The Latest User Reviews of Cote

Learn coding in 5 days! You'll be a tech CEO by the weekend...
More features and events