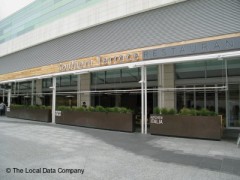 Despite avoiding chains and indoor shopping malls like the plague, it was too late in the evening and I was too hungry to be choosy. Passing by Westfield, the UK’s largest shopping centre and being in dire need of nourishment we walked past rapidly expanding chains Del’ Aziz, Gourmet Burger Kitchen and The Real Greek, before deciding on Kitchen Italia for what would hopefully be an affordable, safe meal.

In keeping with the scale of Westfield, Kitchen Italia is big, with long wooden benches, large tables and a very high ceiling. There was a scattering of diners here and there as it was already past 9pm on a weeknight, by which point the surrounding shops had closed.

The menu featured some mouthwatering choices: ravioli stuffed with roasted duck, pumpkin gnocchi, and polenta and wild boar ragu for example. We started with some crispy bread with mozzarella and Parma ham to whet our appetites.

For my main dish I went for the artichoke ravioli with roasted peppers, garlic and rosemary oil. Sadly this dish did not live up to it’s promise, the pasta was undercooked round the edges yet very doughy in the middle; it felt stodgy and lacked flavour. Even the orange colouring of the pasta began to seem unappealing after a few bites.

My companion fared better with the tagliolini in mushroom cream sauce with Parmesan and black truffles - her portion also appeared to be double the size of mine, dolloped as it was into an ample bowl.

For dessert I chose the lemon sorbet with a vodka shot. In theory the vodka should have been poured over the sorbet in the kitchen, however it was forgotten about and brought to me in a shot glass after the sorbet had arrived. I was also charged separately for it, even though it should have been included in the price.

Staff were friendly if a little uncoordinated. Our starters arrived long before our wine did, and the dessert mishap was a tad irritating. Our meal – whilst not overly expensive- came to over £30 a head which I feel could have been better spent elsewhere. Or we should have tolerated our hunger a bit longer, and waited till we got home.