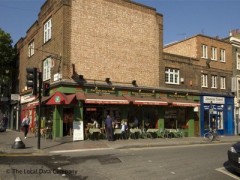 Ads by Google
Tweet
About: Goodfare Restaurant serve a variety of Italian dishes to eat in or take away at their restaurant. Catering for vegetarians is also provided.

I have just returned home from Goodfare restaurant. I have never posted a review of a restaurant before but my bad experience at Goodfare has driven me to write one.
When we entered this cute looking restaurant we did not find the 'welcoming atmosphere' which is advertised. We were greeted by a stern face, and 'sit where you want'. We tried to order milkshakes but the machine wasn't working, having worked in Italian restaurants, as well as bars and nightclubs I know that things can go wrong from time to time so I wasn't too worried and we ordered juice instead. The juice arrived with the stern face waitress (she definitely wasn't Italian) but there was no ice. Now that is no massive problem but as the restaurant was not terrible busy when we ordered one would think that they could put ice into the drinks.
The Calamari that we ordered was not too bad although it did not come with tartare sauce. It was not cheap so you would expect some kind of dipping sauce . Our table had not been set properly as there was no salt and pepper on the table.
I order Fettucini with chicken which was supposed to come in a pesto sauce and my girlfriend ordered lamb chops with chips and vegetables. The fettucini was very disappointing. The pasta was very hard (I like al dente pasta but this pasta had hardly touched the boiling water) and the sauce was gluggy tomato puree with tiny little bit of basil and hard avocado floating around in it. One piece of avocado still had the skin attached.
My girlfriends meal was much better than mine although chops are not hard to cook. Her chips were a bit undercooked though. I complained about my meal but the manager said there was nothing he could do as I had attempted to eat some of it. We ordered a chocolate cake which was satisfactory, although I'm not sure if they make it in the restaurant or buy it from a bakery.

When we tried to pay by credit card the stern faced waitress told us that they only accept cash. The

Stumbled upon the restaurant one night after work and loved it so much we are going back again this week. Food really delicious. Real Italian feel to the place. Full of character.
Added on Thu 30 Apr 2009 at 16:46:46 [report] [respond]
User Rating: 9 / 10

We found Goodfare by chance on a weekend trip to London and had breakfast on both days of our visit.

This is a very welcoming place with cheery hellos and goodbyes with really good attentive service inbetween.

The breakfast menu was varied with several options ranging from Steak and Chips down to the full English, various eggs and smoked salmon. The bacon was thick cut and very good. It was onlt bettered by the fantastic coffee. Mch better than the usual small diner/ cafe.

Would we return, well yeah we did and lots of others did. It was busy on both mornings that we were there.

The Invisible Man: scarier than shades and an overcoat