An institution that exudes the style of literary London louche 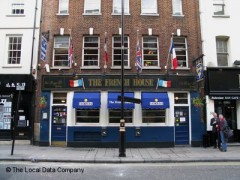 The French House features in these AIL lists...

The best pubs in Soho
One of Soho’s most decadent pubs, The French House is a beauty. It is the thinking persons pub. Lager served by the half, Breton cider by the bottle and a vast wine list. Originally opened by a German gentleman (then known as The Wine House), the pub on Dean Street has long been a favourite of the capital’s artists and writers and you can still feel it. Lucian Freud and Francis Bacon were both regulars.

London's great literary pubs
Artists, writers and poets could regularly be found in the French House back in the post-war years. Dylan Thomas was known to have once left behind his hand-written manuscript of Under Milk Wood here in 1953. It was found and promptly sold. What goes around comes around.

"An institution that exudes the style of literary London louche"

Counting the likes of Dylan Thomas, Lucian Freud and Francis Bacon among its former barflies, the French House is one of those Soho institutions that has the knack of making you feel like nothing’s changed in the city in the last fifty years. Despite its massive popularity, the bohemian spirit still lives on at the French House, where its regular characters still prop up the bar, part of the furniture in this central Soho village local.

Who knows what makes the French House so evocative but without doubt it’s one of those places people still come to soak up a little of that literary London louche. Maybe it’s the half pint only beer policy, or the lean towards wine, or the familiar faces behind the bar that you see year in year out, which all have a hand in keeping the pub so in tune with the past and the present despite the fading Soho around it.

Serving a weekday lunch menu only, food can be found between
12:30pm and 3:30pm and despite the appeal of the likes of lamb rump and chicken liver parfait, the liquid lunch is likely the more popular choice at the French House.

It may be everyone’s favourite Soho pub but the popularity of the French House hasn’t diluted it, changed it or negated its inimitable charm, and we’ll be visiting for Meteor halves, Breton cider and vin rouge until we can’t anymore, one way or the other.