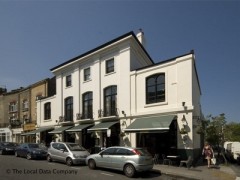 Ads by Google
Tweet
About: Lemonia serves a variety of traditional Greek-Cypriot dishes and can cater for private parties of up to 40 guests upon request.

There is a Greek restaurant called Lemonia just down the road and I’ve been going there for more than 30 years. I know the owners and they serve such great food. It’s important to support local businesses.

The Latest User Reviews of Lemonia

I went to Lemonia with friends on a recent Friday evening. The restaurant was very buzzy and lively with a great atmosphere. The service was good and the staff friendly and attentive but I was disappointed with the food which I thought was somewhat overpriced for the quality.

The starters were fine but my main course was, how shall I put it, lacking in exuberance. For £14 (almost £16 when the service element was added) I was served a disappointingly small tuna steak on its own with a side plate of spinach. The tuna was acceptable (I have tasted far better) but the spinach was inedible and I gave up trying after several minutes of chewing the unchewable. Had I not been with friends I would have asked them to take the spinach back but I did not wish to make a fuss in company and so let it pass.

We had a plate of mixed fruit for pudding which was good but my filter coffee was a challenge. It tasted bitter as though it had been left to stew for a long time and was barely drinkable. As a general comment, I have almost given up on coffee in restaurants as it is often truly awful and sadly Lemonia's was no exception. [Experience has taught me never to order tea.]

If you want to soak up the pleasingly hedonistic atmosphere of Londoners starting their weekends then Lemonia is a great place. However, don't order the tuna and be prepared to use a Stanley knife on their spinach. And leave the coffee until you get home.

I had the most unfortunate experience in the restaurant last night. I went there to cheer up my mum who's had a particularly difficult time lately. Within ten minutes of being sat down, she had her bag stolen from under her seat and was most distressed. Not only were the staff completely unhelpful and carried on serving, doing nothing to try to comfort her, but they also refused to return my £20 deposit, even though we hadn't yet ordered food due to the theft of her bag. The most unhelpful, uncaring and cold staff I have come into contact with. I'm sure if their mother had recently lost her husband and broken their arm, they'd want to know that somebody would show a tiny bit of compassion towards them when their belongings had been stolen. I've never written a review before but feel utterly disappointed in this establishment.

My boyfriend and I had dinner here to celebrate Valentines day. As you can imagine, it's one of the most busiest days of the year. But despite this, Lemonia provided us with an excellent service throughout our meal and never kept us waiting.
The food was beautiful, as usual. We had a range of starters including fugges, calamari and koubes. The koubes were especially delicious (they are very rarely on the menu in greek restaurants so if you happen to see them on it - try them!!!)
We had the Veal and Rabbit as our main, both of which were cooked just right!

I highly recommend you book well in advance as you'll be very lucky to get a table on the day.
Overall a brilliant place to dine