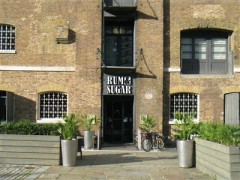 Ads by Google
Tweet
About: Rum and Sugar is the latest Restaurant/Bar to open at Canary Wharf, located in a historical Rum warehouse at West India Quay, we pride ourselves on locally sourced British produce, premium rums, mojitos and bottled beer from Central America and beyond.

The Rum and Sugar Team will be pleased to welcome you to sample our food, peruse the wine list over a mojito, or simply sip a cold beer as you watch the sun go down on our outside terrace.

With the added advantage of being located in the Museum of London Docklands, we are able to provide meeting rooms and seminar space all within the realms of the Museum. So why not contact us and have your cocktail party surrounded by the historical features of the 1800's.

I met my West Indian friend from her lofty Canary Wharf office and we decided to enjoy the warm summer Friday evening where there was a water view.

Rum and Sugar is along a row of restaurants offering glorious dock side views – there’s a Brown’s, Henry’s and one or two others. Rum and Sugar is towards the end – right next to the Docklands museum. You have to cross that little pedestrian bridge to reach it. Such a delightful location.

The sun was glinting off all of the tall buildings all around us as well as the water and we felt truly blessed to find a table under a parasol amongst all the very happy groups of people there. Some around large tables and others snuggled into some of the beautiful sofa and armchair arrangements. Some were drinking from large jugs of berry coloured cocktail. They looked happy.

The service was sprightly – upon sitting we were presented with the most amazing bar menu. Cocktails, rum flights (effectively a rum mini-tasting menu) and then pages upon pages of white rums, spiced rums, organic rums, solera rums, golden rums, dark/navy rums, agricole rums and even rum liquors. We were in heaven.

We decided to try out the Mojitos (£8.50) – it’s my standard test of cocktail quality. And we ordered some mini Jamaican patties (£2.70). Then the service overload began. There must have been four different serving staff checking on whether we had ordered and wanting to take away our food menu. Each time we politely explained that we had ordered drinks (it was only 545pm) and would probably order some food in a while so could they please leave the menus.

Despite the constant interruptions about the menus, we were really enjoying the scenery. It was like being on holiday. However, the main music we heard was from the Spanish tapas restaurant next door. Maybe we were in Cuba?

Our mojitos arrived. A bit of a disappointment – not much mint or lime in evidence. But we drank them anyway. My friend’s expression at the tiny size of the three patties was priceless. She was genuinely shocked.

Still, we decided to press on with our food order. She opted for beer battered fish and chips (£11.50) and I choose the beef burger with pulled pork, cheese and crispy shallots (£11). The chips arrived in a pot. The food was passable rather than notable.

We ventured inside to visit the loos. And this was a revelation – marvellous wooden floors with loads of space in between tables (maybe for dancing later?). Some seriously good music. And huge barrels arranged as wall dividers. The chairs were eclectic – wooden church pews, leather club chairs – marvellous. It was so good we were almost sad that the sun urged us to return outside.

But back outside the sun was shining and we were having a good time. Then the young waitress announced that we had to pay our bill. And then set up a tab. We explained that having had two cocktails and something to eat – and it was only 7pm – we planned to continue drinking. She apologised politely but explained that as a couple had recently eaten and run off without paying this was now the new policy. Bearing in mind we had seen a burly security guy politely escort a beggar off of the deck, we thought it highly unlikely that anyone would try that again. We tried to reason with the waitress but she was insistent. So we paid up and prepared to leave. I admit that the manager did come out to apologise and explain that this was an error – and even offered a complimentary dessert. But we declined – our evening quite spoilt.

However, it’s summer and it’s Canary Wharf so we found ourselves a fabulous pop-up outside bar near Brera – with really amazing music, some seriously party people and a backdrop of cooling fountains. We joined the happy people there and enjoyed the rest of our evening.

So, Rum and Sugar. Lovely location. Historic building. Amazing outside deck. Fantastic interior. Perfect party place. But somewhat lacking in food quality. And the service is definitely not laid back Caribbean style.

Baaad boys, bad boys whatcha gonna do? They're back.

Are you a dreamer too? Get your tickets for Amelie at The Other Palace
More features and events