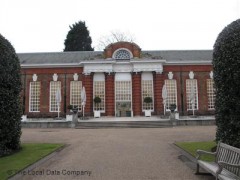 Reviewed by Matthew B

Afternoon tea, that most English of pastimes, has always been a 'thing to do' in London, usually as some kind of treat for a special occasion. I don't know anyone who goes to those lengths in their own home, beyond having a slice of cake or a biscuit with their afternoon cuppa. Consequently, the places people choose to take afternoon tea are typically posh hotels - all of the top twenty London Afternoon Teas selected by the Tea Guild are in hotels.

The Orangery is not set in a hotel, but at Kensington Palace, and has the advantage of making you feel that you’re in the countryside despite being in Zone 1. It is in the midst of Kensington Gardens so there is no traffic, and is suitably squirrelled away that it is spared the invasion of promenading park visitors beyond the hedge. The vibe is a little bit like that of an upscale National Trust stately home.

The Orangery was originally built to grow...oranges! Amazing the lengths posh people would go to in order to make exotic fruits available before we started importing the stuff. This grand, airy and light-filled structure now lends itself perfectly to the genteel pursuit of sipping tea and nibbling on scones. It’s been serving food for 21 years, and is also open for lunch, although it has been out of the limelight recently - literally, as it was hidden behind large construction fences erected during the renovation of the Palace next door.

But now everything is pristine and back in view, from the beautiful ornamental sunken garden, kept unspoiled from the public's grubby mitts behind locked gates (our vista was only ruined/enhanced by two pigeons having sex on the paved area) to the wiggly high-bushed path up to the tree-lined lawn that leads up to the Orangery. It’s a tranquil spot with a terrace should the weather allow you to sit outside, but that would seem a bit of a waste when the inside is nicer.

There is a firm template for afternoon tea that nobody messes with. The main components, all present and correct here, are a pot of tea each, savoury finger sandwiches, a cream tea of scones, preserves and cream, and to finish, a selection of fancy cakes.

It is worth mentioning at this point that the Orangery have revamped their bone china tea service with a historical palace design incorporating crowns and the like. Bone china is definitely nice to eat and drink from, but I won't personally be rushing out to buy one of their teapots at £70 each, or cups and saucers priced at £40.

We had sandwiches of smoked salmon and cream cheese, egg mayo, and a nice twist on the cucumber sandwich with mint, followed by scones; they haven't tried reinventing the wheel here and I'm glad. Among the cakes there was a classic Victoria sponge, a passion fruit tartlet and a take on a Florentine. This was all just about right for what is after all not meant as a heavy going experience, it's meant to be about refreshment. That, and pretending you were born into the upper classes 150 years ago.

Where the Orangery loses points is the small matter of spending a penny. I can understand that it was built for oranges and not for serving food, but one has to leave the building, walk around the corner and punch in an entry code to access what is not much more than the sort of loos you find in Hyde Park. I can't see HM the Queen using it, put it that way.

At £22.50 sans champagne this is a good value tea. With Claridge’s and the Ritz booked up months in advance and costing twice the price, the Orangery is a nice alternative.

Matthew B reviewed The Orangery Restaurant on Fri 05 Jul 2013

Boost your wellbeing during Lockdown with Breathwork