The pizzas will make regulars of most who visit 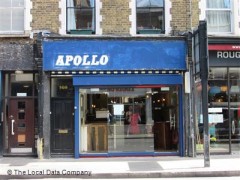 "The pizzas will make regulars of most who visit"

If Apollo were a dog, it would be the mongrel puppy that everyone wants to take home over the pure breed sitting next it. If it were a house it would be the ramshackle property everyone would take over a soulless new build. If it were a film, it would be the low budget, high class, cult classic beating the vapid blockbuster to the Oscar. But, it’s a restaurant and reading into those spot-on analogies, you can tell we like it. A lot.

A restaurant with mass appeal in Stoke Newington, Apollo is the DIY pizza place that packs its tables every night. And – going back to those analogies – with the pure breed, new build, blockbuster presence of Franco Manca a few doors down, its success is even more impressive. Serving up thin, crispy sourdough pizzas from its traditional Neapolitan oven, Apollo can cook a pizza a minute. Charred edges, chewy, lightly salty, tangy dough and quality toppings elevate the simple dish to something beyond. Walnuts, blue cheese, pecorino and Italian sausage decorate the sour dough base and the quality is excellent. In fact, so good is this pizza, that our greedy group of five ordered an extra margherita instead of dessert. A gluttonous act that proves this is some kind of place.

To accompany the pizza we sampled the Five Points Pale Ale, knocking back two or three bottles apiece as we cooed over the fine pizza and even finer perm on a 1970’s photo of a certain Arsene Wenger that decorates the downstairs restaurant. It’s touches like this that gives Apollo its oddly stylish DIY aesthetic but it’s the pizzas that make regulars of most – the pizzas and the excellent service.

Picasso and Paper at the Royal Academy of Arts

FishWorks: A little luxe without being pretentious or stuffy

Dev does Dickens: The Personal History of David Copperfield
More features and events