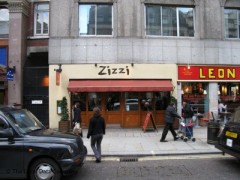 Ads by Google
Tweet
About: Zizzi is a chain of traditional Italian pizza and pasta restaurants that cook all their pizzas in wood burning ovens. Guests are advised to phone for details about catering for private parties and seating on the pavement area is provided, weather permitting. A takeaway menu is available. This branch can cater for private parties of up to 130 guests upon request.

My local Zizzis are in Twickenham and Richmond and I have been to branches in central London. I have been to them on many occasions as they are one of those restaurants where there is something for everyone – even moody teenagers and picky kids. They also manage to cover all sorts of occasions – a fast social or business lunch, a relaxed informal dinner for couples or girls dining out or even for larger groups. One size fits all.

Main courses are from a comprehensive selection of salads, pasta, pizzas and risotto. My son adores the chicken sofia pizza (£8.45) and my daughter always has lasagne (which they are happy to put on a cold plate for kids - £8.50). Garfield girl!

My personal favourite has to be the piccante calzone (£8.95). Calzone is a folded over pizza – so it looks a bit like a big pasty. It comes with a salad garnish so you might want to think about a side salad if you have no starter. And piccante has a spicy kick to its moist, meaty contents. My vegetarian friends like the salmon calzone (£9.25) a lot too. I am also rather partial to spaghetti polpette (£8.50) which are classic Italian meatballs. But take care with the sauce splashes on your clothes.

It’s tasty, plentiful food in a pleasant and relaxed environment. The Richmond branch has really nice stacked wood décor and the Twickenham branch has a light, airy feel about the place – European and modern but still warm and inviting. A reliable choice that has something to offer everyone. Gets my vote.

The Latest User Reviews of Zizzi

New Layout doesn't cater for couples. Stood on the stairs for 10 mins waiting to be seated. Then we were led to a strange corner table with enough room for 1 1/2 people. We declined this table and were offered a table on the end of a group of six people directly adjacent to the stairs and in full view the 20+ people waiting to be seated. We declined this as well, no because we are snobs but if you saw it you would too. Then waited a further 35 mins watching several groups of 3 - 20 people getting served before us and about 5-6 other couples in the waiting area (stairs).
The staff even pulled several two seater tables together to seat a large group at the back of the queue!
We even asked if they could phone Bow Street and get us a table there to which we were told Bow Street was turning people away and sending them to Strand.
Eventually, after 45 mins we gave up and decided to go to Bow Street and check it out ourselves. We were seated immediately and served quickly too.
Conclusion - Laugh off Strand Zizzi unless you are in a big group.
Go direclty to Bow Street where you will an all round better restaurant.

We were at Zizzi in Highate on Sunday the 24th of february 2010 in the evening.
We ordered two Margherita pizza , well first of all they both arrived without any Basil! The pizza was the worst I have ever had in London! It had a bitter taste and we had the feeling that they either used the wrong cheese, not proper mozzarella or the mozzarella they used was off.

Went to Zizzis for lunch with some colleagues. The restaurant was clean and the staff were polite, was impressed by the quick service. Pasta dishes - highly recommended.
Added on Mon 21 Dec 2009 at 05:12:01 [report] [respond]