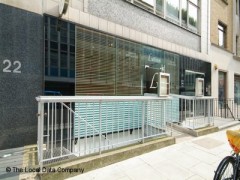 Opposite the Sanderson Hotel, this restaurant is so tucked away that you might miss it if you were not looking out for it, nestled as it in the basement of the surrounding tall office blocks.

I was there with one of the local office inhabitants (head of a PR company) who goes there regularly. The staff appeared to know her well and were very friendly and welcoming yet polite and efficient – showing us to a quiet table around the back of the large L shaped restaurant. A perfect location for business discussions – especially if you are briefing the media!

The décor is modern and tasteful, if a little bare and anonymous. I genuinely don’t recall what paintings or art were on the walls but I remember the predominant colour was a womb-like warm red – with lots of glass and shiny metal on the pristine white tablecloths.

As we sat down we were presented with nicely bottled tap water and a basket of delicious breads – including those with nuts and sun dried tomatoes and even some flatbread. With a dish of olive oil.

The A La Carte menu offers two courses for £26.50 or three for £29.50.
We skipped starters although there were some interesting items on the menu such as pig head terrine and courgette flowers filled with crab meat as well as more common Italian dishes such as Mozzarella with courgette and tomato. Fish courses include roast monkfish with lentils, asparagus, capers and garlic leaves; pan-fried Cornish red mullet wrapped in basil leaves and grilled fillet of sword fish. The pasta dishes were pretty standard although the pappardelle with wild board ragout sounded tempting. Meat dishes offered included sirloin, calf’s sweetbread, best end of lamb and slow cooked pork belly.

I chose the risotto with fresh asparagus which had absolutely the right texture and colour but tasted a tad bland. And I genuinely cannot remember what my companion chose – which is very unusual for me - so either the food was unmemorable or the conversation particularly good.

There is also a specialist “Passion for ravioli” menu and a Simply Lunch menu (two courses for £15.50 and three for £19.50) – with borlotti beans and pasta soup, prawn and asparagus salad and parma ham with celery and pecorino cheese as starters and pesto tagliolini, grilled salmon with mashed potato and roast saddle of rabbit as mains.

The web site states “Named after the southern Italian region of Lazio, Latium is owned by Chef Patron, Maurizio Morelli along with London restaurateur, Claudio Pulze. Opening to great critical acclaim in September 2003, it has fast gained a reputation among its loyal clientele as one of London’s finest Italian restaurants”. Well, I think that Latium, whilst still very pleasant, has passed the peak that it may have had in 2003.

As it was a really hot summer’s day, I had bare arms and found the air conditioning so fierce that I was actually shivering while I ate. So please take something to cover up with if you go there during some of our rare good weather.