Good eating with enough sweet touches to stand it head and shoulders above the crowd. 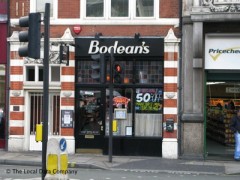 Ads by Google
Tweet
About: Fans of Bodean's, London's award-winning original BBQ Smokehouse, will be pleased to hear a third restaurant has opened in Fulham Broadway. Having conquered Soho and Clapham with its unique brand of American BBQ, Bodean's - twice nominated for the Tio Pepe ITV London Restaurant Awards - has turned its attention towards south west London.

"Good eating with enough sweet touches to stand it head and shoulders above the crowd."

If it is meat that is on your mind then Bodean’s is the answer and then some. Southern American BBQ heaven, it is one of the best places in town to get the sweats. There are multiple locations across London, but the restaurant at Fulham Broadway was calling on this particular evening. On arrival it looks suspiciously narrow but once inside, the small size welcomes an intimate and informal atmosphere to go along with the less than ‘proper’ table manners that eating BBQ requires.

Lined with plush buttoned leather booths and the usual American memorabilia – think fluorescent pig lights, college fonts and yet more animal motifs- it certainly likes its southern roots. The Bodean’s ‘thing’ seems to be authenticity and with a cosy cabin feel to the restaurant, it comes across as more than real enough for London’s cook-out enthusiasts. There is even a calendar of American sports events shown live on the restaurant’s screens.

To be clear, Bodean’s is not fast food. The meat is thoroughly prepared through a cycle of slow smoking and gets the super marinated treatment from a bunch of secret sauce recipes. There are chicken wings with various sauces (the blue cheese is an excessive kind of magnificent), tasty crab cakes, enchiladas and of course, double stack burgers. However, it would be sacrilidge to leave without ordering some form of pork. The baby back ribs are superb, although if you’re looking for a slightly larger amount of meat then the spare ribs don’t come up quite so lean. Served with coleslaw and fries there is also a choice of ‘burnt ends’ – perfectly chargrilled, moist pieces that need to be sampled. The pulled pork deli sandwiches are the king of London’s sandwiches and make for the best choice for anybody that likes their meat away from the bone.

There is a good selection of American craft beers to go with your pig out, along with an adequate selection of European lagers. Prices are a bit of a mixture, which means that there’s something for everybody. Expect to pay around £15.00 for a meal with a beer.

If you can buy into the whole ‘Kansas BBQ in London’ thing then there is no doubt that it won’t just be the food that satisfies. In short, it’s good eating with enough sweet touches to stand it head and shoulders above the crowd.

Keep the kids busy for 30 mins: learn how to draw Gregosaurus

Exercise the grey matter with the Virtual Pub Quiz

Staying at home? Learn to jive or tango in your pants
More features and events