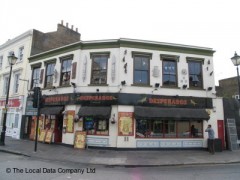 Ads by Google
Tweet
About: Desperados is a Mexican restaurant serving popular Mexican dishes and cocktails.

The Latest User Reviews of Desperados

All the staff in here are Turkish which isn't a problem but they rip you off so much and in the bar upstairs the turkish staff sneak sips out of your drink!!!!! I caught the ugly turkish women who works there taking a sip out of my drink RED HANDED and when i confronted her about it she just played dumb and tried her hardest to disengage me and all the other staff who were around had the looks on there face's like naughty children who have just been caught doing something wrong. And whats worse is i caught them doing it AGAIN!! It's disgusting and terrible customer service. DO NOT GO HERE!!!!
Added on Thu 27 Oct 2011 at 21:18:13 [report] [respond]
User Rating: 5 / 10

Anca, London
Added: Dec 2010
I had dinner in Desperados on a busy Friday evening. The service was a nightmare! We were quickly seated but after ordering, only one starter (out of two) arrived. While my friend and I shared the only started to ever arrive, one of the waiters came to our table to inform us that the table we were seated at was to be joined to a bigger table to accommodate 6 people and therefore we were suppose to move... while eating already... We refused to move but the waiter would not leave until we finally accepted to move to another table. There was no discount nor a complimentary drink. The food was mediocre. I will never go to Desperados again and if a waiter will ask me to move ever again, I WILL NOT!

If you looking for good food and also get a feel for mexican cuisine , this is no doubt the place to go. The food is the best food i have had in London .London and england you do struggle to get a good steak or ribs being from South Africa we are used to good meat, And this is the only place that i have been too that actaully competes for the title .
Added on Sat 02 Jan 2010 at 09:17:55 [report] [respond]
User Rating: 1 / 10

I haven't even stepped foot into this place and nor would I want to!
I rang them to make an enquiry and spoke to the manageress. After I asked her how old you had to be to get into the bar she replied "You live in this country and you don't know madam?' I told her this was an extremely rude comment, she then became very patronising. I informed her that I (in a party of 3) wished to come in to celebrate a 16th birthday, to eat at the resturant then use the bar area afterwards. She replied in a rather patroning manner "Thats a big party!". The telephone conversation ended with me saying "actually I no longer wish to come to Despardos because of your rude attitude" she replied "thats you problem madam" then hung up the phone on me...How rude!!!!
Added on Mon 14 Dec 2009 at 17:51:25 [report] [respond]