Bringing a little bit of Italy to Richmond 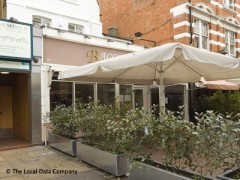 Ads by Google
Tweet
About: Bacco Ristorante Italiano serves authentic Italian dishes with regional specialities. With al fresco dining in the Spring and Summer it is a popular choice for fans of Italian dining.

"Bringing a little bit of Italy to Richmond"

Richmond is well served with lots of great restaurants. And living nearby, I’ve visited most of them. So I was surprised to realise that I had never eaten here before. Mind you, it’s easy to miss – nestled between Carluccios on one side and the famous Orange Tree pub on the other.

There’s a pleasant terrace area – and what makes this place rather special is that there are outside sofas as well as tables and chairs. How very continental! Anyway, I met a friend at the station last week and as we were carrying heavy bags we didn’t want to walk too far and this place is almost directly opposite the train station. Convenient.

On a rare warm evening we were keen to be seated in a cool area so the maître d’ showed us to a little table right at the back – it’s bigger inside than you imagine, but still intimate. The bar is at the front of the restaurant and it is narrow so you do feel a little close to others. It wasn’t terribly busy when we were there although I could catch snippets of conversation from the two women who were talking rather animatedly against the other wall.

Some olives and warm cubes of focaccia with dipping oil were placed in front of us as we surveyed the menu. We were told that the special was lamb – but not what sort of lamb nor how it was cooked. Oh well.

We ordered a bottle of Verdicchio which was excellent value at £16.25 and really hit the spot. My colleague chose the mushroom risotto (£14) which was slathered in cheese and therefore a rather filling choice. He declared it better than expected.

I selected the crispy skinned sea bass (Branzino £17) which had a fresh, very tomatoey sauce on a bed of samphire, which I adore. There are no chips or fries on the menu (very Italian!) so I ordered a side of roast potatoes (£2.50).

The music was nice if eclectic – it started with some mellow jazz and moved onto the Rolling stones, which was fine by me as I’m a big fan. And the wine had mellowed us so we continued to chat, soak up the modern non-nonsense Italian atmosphere and enjoy desserts.

My companion’s tiramisu arrived in a cocktail glass and had a light, airy texture – almost like a mousse. My coppa amaretto was three large scoops of fresh ice cream in a traditional ice cream glass and I’m afraid that there was so much that I couldn’t quite finish it all.

The total bill came to £68.90 including service which I thought was good value for money considering we had a bottle of wine and two courses. Why would anyone want to go to a chain when there are lovely little authentic independent Italian restaurants like this?