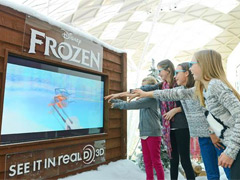 The Vue Cinema foyer of Westfield, Shepherds Bush is set to undergo a seasonal makeover this weekend to mark the upcoming 3D release of FROZEN on 6th December.

RealD, the world's most widely used 3D cinema technology, Vue Cinemas and Walt Disney Pictures have partnered to create a one-off, interactive experience, which will celebrate the magic of the film in 3D.

From the 22nd of November to the 2nd January 2014, cinemagoers can visit the Frozen Cabin in all its glory. Visitors will have the chance to wander the winter wonderland, have their photos taken with the lovable Olaf, the snowman standee, and watch the trailer in the cabin on a giant RealD 3D TV. The first 10,000 visitors will receive a limited edition Frozen keychain, and RealD have also supplied custom-made Frozen 3D glasses with which to watch the trailer.