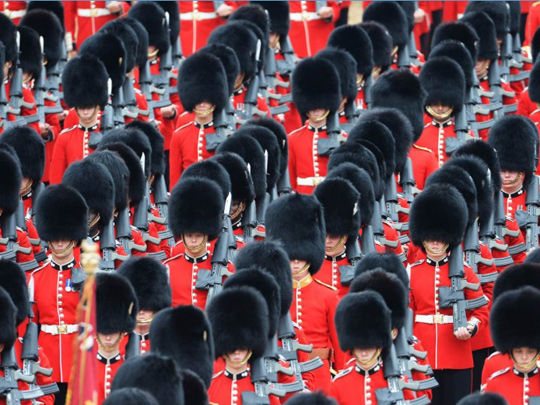 Free to watch in the crowd along the Mall

The Sovereign's birthday is officially celebrated by the ceremony of Trooping the Colour (Queen's Birthday Parade). This impressive display of pageantry takes place on a Saturday in June by her personal troops, the Household Division, on Horse Guards Parade, with Her Majesty the Queen herself attending and taking the salute. Over 1400 officers and men are on parade, together with two hundred horses; over four hundred musicians from ten bands and corps of drums march and play as one. Some 113 words of command are given by the Officer in Command of the Parade. The parade route extends from Buckingham Palace along The Mall to Horse Guards Parade, Whitehall and back again.

During the ceremony, The Queen is greeted by a Royal salute and carries out an inspection of the troops.After the massed bands have performed a musical 'troop', the escorted Regimental Colour is carried down the ranks.The Foot Guards and the Household Cavalry then march past Her Majesty, and The King's Troop, Royal Horse Artillery, rank past.The Queen rides in a carriage back to Buckingham Palace at the head of her Guards, before taking the salute at the Palace from a dais. The troops then return to barracks.Her Majesty then joins other members of the Royal Family on the palace balcony for a fly-past by the Royal Air Force.

The first Trooping the Colour which is reviewed by The Major General usually takes place two weeks before the actual Birthday Parade.

The second Trooping the Colour which is reviewed by The Colonel of the Regiment usually takes place a week before the actual Birthday Parade.