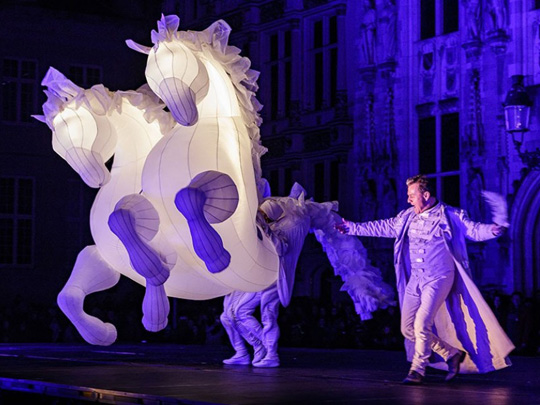 Various, some events are free

GDIF offers the ultimate festival experience with 10 days of perception-changing outdoor performing arts. Streets, parks and public spaces across Greenwich and East London will be transformed with a sensory overload of colour and extraordinary staging.

From the cinematic waterfront setting of A View from the Bridge to exquisite South Korean choreography in a column of water and an exuberant techno parade in Woolwich, GDIF 2017 offers outdoor theatre adventures for everyone.

FierS à Cheval
Prepare to be amazed, as, under the gaze of the Cutty Sark’s famous figurehead, a team of illuminated white horses appear, accompanied by a symphonic soundtrack.

Museum of the Moon
The London premiere of Luke Jerram’s stunning artwork touches down in Greenwich Park featuring an incredible seven metre inflatable moon sculpture, with detailed NASA imagery of the lunar surface.

The Colour of Light
Enormous colour-wheels roll through the streets of Woolwich gathering and welcoming everyone on the way. Join a promenade performance that celebrates inclusion and open-heartedness set to an epic soundtrack by composer Shri Sriram.

A View from the Bridge
A story of dock workers and illegal migrants in search of the American dream is given new resonance against the backdrop of the 21st century London riverscape. This is the UK première of acclaimed company De Roovers’ Belgian adaptation, in a new English translation commissioned by GDIF.