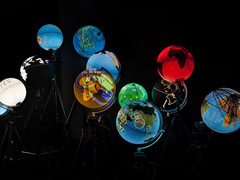 Across the globe, we see and hear more and more stories about the exponential growth of data and its associated advantages and dangers. We are aware that today people generate data on a daily basis, through mobile telephones, social media and online transactions. In 2009, we produced the same quantity of data as in the entire history of humanity up to that point. By 2012, it was estimated that 2.5 quintillion bytes of data is created every day. The world contains an unimaginably vast amount of digital information which is getting ever bigger ever more quickly.

Big data is a modern buzzword, yet still an overwhelming majority do not fully understand its meaning, let alone truly comprehend its impact and implications. Undoubtedly, data and all it entails is a key topic of our time, but one that can be baffling; statistics and processes seem often invisible or unfathomable and conversations around the datification of the world are never clear-cut.

Through dynamic and engaging art and design projects from a range of international artists, including some newly-commissioned by Somerset House and some never seen before in the UK, Big Bang Data will demystify data by inviting visitors to look at the ways digital information is produced, organised, used and interpreted, and how it is changing the way we live. The contemporary artists have used data as raw material to create their works and draw upon data from all corners of modern-day culture from science to sport, politics to pets. It is data that has been produced not only by research centres, but also the public, possibly even visitors to the exhibition.

The exhibits will contemplate the complex and often conflicting issues raised by big data for governments, companies and the individual alike. Is data an instrument for knowledge and a democratic tool for efficacy and transparency, or is it the ammunition for an industry of mass surveillance? Data culture is still under construction and its evolution is unclear. While Big Bang Data will lift the lid on practices employed by the political and business sphere and delve into data security and privacy, it will also reveal the creative possibilities of data and show how citizens, communities and institutions are shaping the future form of our data society for the common good.

One of the exhibition highlights will be a London Situation Room, whereby real-time data collected from the city will be screened with visitors contributing and affecting change to the data displays. Other city-centric works will feature, such as Lev Manovich and Moritz Stefaner’s selfiecity London project, which will be specially devised for Somerset House. A team of artists and scientists will assemble thousands of selfies taken in London and turn them into rich media visualisations, with which exhibition goers will be able to interact and discover interesting patterns in London’s selfie phenomenon. In Thomson & Craighead’s London Wall, the artists will intercept publicly available tweets and status updates posted online near Somerset House and re-republish them as an array of fly-posters within the show.

Further notable installations will include Timo Arnall’s immersive film Internet Machine to take visitors inside the closely-guarded industrial infrastructure of data storage. Ingo Günther’s ongoing World Processor series transposes sets of data onto ready-made globes, for example demonstrating how some companies’ yearly gross income is larger than the entire GDP of a given country.

The history of data will also be studied in the exhibition. The idea that we are living in the wake of a major information explosion is not new and numerous examples of data creation and collection that have changed the world through the ages will be showcased, such as John Snow’s On the mode of communication of Cholera and Florence Nightingale’s Notes on Matters Affecting the Health, Efficiency and Hospital Administration of British Army.

In addition, an energising series of interactive events and workshops will be hosted to provide a platform for in-depth discussions and participatory projects that question, challenge and contribute to ever-changing debates on big data.