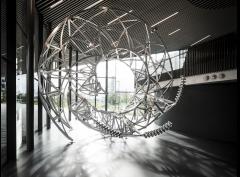 NOW Gallery’s latest commission, Straight jacket star jumps by British sculptor Alex Chinneck, is a 21-metre-long curled up pylon on display until 10 January 2016. Like a ship in a glass bottle, the wound-up pylon defies logic to fit within the 7-metre-high space.

Referencing the industrial history of the site, which once included the largest oil and gas works in Europe and a steelworks, Alex Chinneck has created a lattice of steel that coils under apparent tension to fit within the room. The construction and materials reflect the same visual and material language of multiple structures across the Peninsula, particularly the redundant gas tower located close to NOW Gallery, while also evoking the idea of power generation and supply.

To complement the installation inside the gallery, Alex Chinneck has also created outdoor installation A bullet from a shooting star at Greenwich Peninsula that takes the unconventional form of an inverted electricity pylon. The 35-metre high structure has been designed to be seen from a distance and can be viewed from North Greenwich Station, the Emirates Airline cable car, the Thames Clipper service, Canary Wharf and all planes that fly to and from City Airport. Illuminated at night, the work acts as a literal beacon and projects a maze of latticed shadows. A bullet from a shooting star contains a combined length of 1186m of steel weighing 15 tons. There are 450 pieces of steel with over 1,000 engineered connection points. The foundations include 25m deep piles within 120 tonnes of concrete.

Both installations defy logic through structural deception by presenting the same object in a very different way: A bullet from a shooting star is outstretched and confident whereas Straight jacket star jumps is reserved, recoiled and contained. Chinneck’s indoor and outdoor works have been conceived to share a dialogue that links the East and the West of the Peninsula. Physically separated, yet sculpturally connected, they will encourage visitors to explore both areas of the expansive and extraordinary district and unravel its rich history.

Alex Chinneck’s studio has also released a limited edition screen print to accompany A bullet from a shooting star. The edition of 100 will be available from www.alexchinneck.com from 19 September 2015.

Jemima Burrill, curator of NOW Gallery, said, ‘Alex Chinneck has shattered all our expectations. We knew what the two sculptures would look like, but the effect they have had on the landscape of the Peninsula and the gallery has surprised us all; the gallery now houses a very creature-like pylon. They are designed for their settings, but they have changed the way we look at the view towards Canary Wharf from Greenwich Peninsula.’