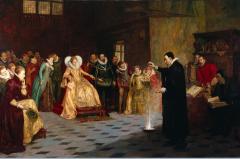 Mathematician, astronomer, astrologer, explorer, occultist, cryptographer, imperialist, alchemist and spy. John Dee, ‘Dr Dee’, a man described as ‘The Queen’s Conjuror’ and inspiration for Shakespeare’s Prospero, continues to fascinate centuries after he set foot in the court of Elizabeth I.

Now, one of the most intriguing and enigmatic figures of Tudor England is revealed to the world as never before. This astonishing exhibition reunites John Dee’s lost library with an amazing array of his personal artefacts, from magic mirrors to crystal balls, for the first time since his death four hundred years ago.

Alongside classical histories and guides to the art of love, visitors can see treatises on geometry complete with antique pop up diagrams, and read introductions to the craft of alchemy, turning base metals into gold.

Also on display are Dee’s astrological textbooks: made all the more fascinating by the fact this was a man once imprisoned for casting horoscopes of Queen Mary. Strangest of all are the accounts of Dee’s ‘conversations with angels’: for over quarter of a century he believed himself in contact with divine spirits via mediums known as ‘scryers’.

Highlights of the exhibition are the elaborate and enthusiastically penned annotations Dee made in his books. His comments and doodles reveal an interest in medicine, belief in a single ‘language of God’ as spoken by biblical Adam and enchantment with cryptography, the science of codes.

As exciting as the remarkable remnants of Dee’s library are a selection of the captivating and fantastical objects he used to practice his diverse pursuits.

From the British Museum comes a crystal ball for researching the occult and conversing with spirits, a ‘magic disc’ for contacting angels and ‘magical mirror’ for conjuring visions. Meanwhile, the Science Museum supplies a ‘scrying mirror’ for predicting the future and John Dee’s own crystal, which he claimed was given to him personally by the angel Uriel, who also ‘instructed’ him on how to make the legendary philosopher’s stone.

John Dee is the man for whom the word ‘polymath’ seems coined. No figure from the Tudor world better exemplifies the diverse and contradictory preoccupations of the age. At once deeply religious and fastidiously superstitious, both a scholar of mathematics and magic, a keen historian on the one hand and courtier on the other.

Over four centuries in scope, this magnificent exhibition reveals the enigmatic and paradoxical John Dee as never before: through the books that he read and objects he owned, the words that he wrote, the drawings he drafted, the life that he led and the influence he has had over hundreds of years.

There will be no more magical and unmissable glimpse into the Tudor imagination in 2016.