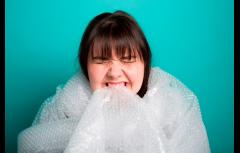 Sofie has won all the awards (Chortle Best Newcomer 2014), been on all the TV shows, got all the best press. Ten stars. ‘Ice-cold heart of a killer … hilarious’ ★★★★★ (Skinny). As seen on Russell Howard’s Stand-Up Central and BBC Two, and heard on BBC Radio 1 and BBC Radio 4. ‘Hagen’s debut hour is fantastic… consistently funny, personal, and a slyly powerful show…this certainly is the show of a winner’ ★★★★1/2 (Chortle).