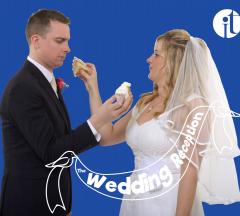 Boasting 5* reviews from its 2015 seasons in London’s Covent Garden, Brighton Fringe and Edinburgh Fringe, this new immersive comedy by the producers of Faulty Towers The Dining Experience returns to Covent Garden from January… complete with new bits! And there’s a special pre-Christmas treat: book before 25 December for £5 off all tickets.

Will & Kate’s dream was for a small intimate wedding – but Kate’s Mum, Lynne, had other plans! In a bid for peace, a compromise was reached, and the happy couple tied the knot in a registry office so that Lynne’s lavish reception could go ahead without fuss… though ‘without fuss’ isn’t quite how it turns out!

Be a guest at The Wedding Reception. It’s a 2-hour comedy that’s immersive, highly improvised, and as interactive as you want it to be. Featuring award-winning performers in multiple roles, this outstanding new show is ‘hilarious!’ (BN1 Magazine) – and, in true wedding reception style, it even includes a sit-down dinner, with cake! Join the party. It’s a roller-coaster journey full of fun, frolics… and more than a few surprises!


The Wedding Reception is a new immersive comedy by the producers of Faulty Towers The Dining Experience. It features a 3-course meal and four actors in multiple roles. During its first year of performing, it’s won tremendous reviews. Now with ‘new bits’, it returns to London Covent Garden before touring Australia, then returning for Brighton and Edinburgh Fringe Festivals.