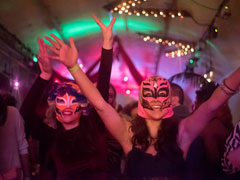 Since its inception in 2012 VAULT has hosted over 250 productions, from outrageous comedy acts to hard-hitting political theatre and experimental new work from Britain’s most exciting emerging artists. 2016 promises to deliver another feast for the body, soul and mind with an international array of performances exploring themes such as gender, mental health, conflict and much more.

The myriad of shows on offer includes SQUIDBOY, starring award-winning physical theatre performer Trygve Wakenshaw, in which an imaginary friend creates their own imaginary friends. Audiences will be taken through a world of wheelchairs and blow up dolls in a captivating exploration of an autistic mind, dubbed The Misfit Analysis. This performance is written and lead by Cian Binchy who also acts as consultant for the West End’s ‘Curious Incident of the Dag in the Night-Time’. In a VAULT Festival debut, the award-winning company, Clout Theatre present ‘The Various Lives of Infinite Nullity’; a dark and intriguing piece of absurdism centered around a post-suicide support group held in the afterlife. Elsewhere the ‘Queen of Canvey’, Diane Chorley brings her ‘Diantines Ball’ to VAULT and comedienne Lucie Pohl offers up a host of NYC-inspired character comedy in ‘Cry Me A Liver’.

For night owls and party animals VAULT offer up ‘Lates’, every night of the festival will boast parties until the early hours. The Ceilidh Liberation Front, Artful Badger’s Valentine’s Ball, Fat Tuesday Mardi Gras and FILTHy Silent Disco hosted by TimeOut are just some of the opportunities to hit the VAULT dancefloor.