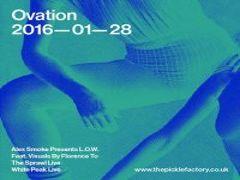 Alex Smoke's much-anticipated upcoming LP Love Over Will represents his third collaboration with the RandS crew, and further explores the vocal territory of his earlier side-project, Wraetlic. Hallucinogenic EPs Dust and Green Man dropped previously on the London label to widespread acclaim. Under his own name, Alex Menzies is primarily involved in composition for film, installation and ballet, and this is also increasingly in evidence in his current work under the Smoke moniker. On 28th January, Alex Smoke presents his new L.O.W A/V show, leaving the dance floor context of his usual sets and working on a more intriguing and varied performance featuring live animations by Florence To.

He's joined by The Sprawl, a collaborative project from Mumdance, Logos and Shapednoise. The three revered producers have been making music on the fringes of grime and experimental 4/4 for some time, but The Sprawl symbolises their full dive into gritty, snarling abstract techno. Their debut release on Death Of Rave, EP1, drew plaudits for its brutal intensity and intelligent meshing of musical forms; while The Sprawl's debut at CTM Festival combined the live performance skills of the trio for a whole even greater than the sum of its three parts.

Support is lent by White Peak, who round out the bill with their debut live performance in London.

This event is 18+, ID required